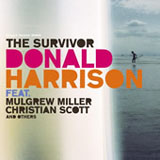 Donald Harrison has earned premiere status in the jazz world as an inventive improviser with a highly personalized voice. His command of the alto saxophone is second to none and his contributions as a genre-hopping composer are compelling to discerning and casual listeners alike. On The Survivor, recorded for the German Nagel Hayer label, the Art Blakey alumnus takes a brazen leap into the world of modern funk with the support of venerable piano giant Mulgrew Miller and open-minded youngsters Christian Scott—Harrison's nephew—on trumpet, Luques Curtis on bass and John Lamkin on drums, with pianist Zaccai Curtis, Luques' brother, replacing Miller on "Oriental Folk Song.

The saxophonist composes with an intentional hip-hop flair to fuel his fluid, warm-toned approach. While perhaps intended for crossover appeal to a mass audience, the music on The Survivor is highly progressive and artistically driven. Whereas incessant funk beats and repetitive harmonic vamps seem to constrict the creative flow of so many smooth jazz performers, with Harrison it seems the opposite is true. The simplistic nature of the title track, "Twerk it and "The Hook Up, for example, allow the New Orleans native the opportunity to explore a seemingly unlimited amount of melodic possibilities. While venturing great distances from the inherent tonal frame of the simplified grooves he manages, in a sly, uncanny way, to assure the listener that a soulful harmonic resolution is just around the corner.

Scott, featured prominently throughout the disc, is a powerful trumpeter who displays a level of sophistication and maturity beyond his years—eighteen at the time of this recording. He displays a full tone with a consistent spark of energy, and his straightforward weaving lines on "Cool Breeze and "Oriental Folk Song are reminiscent of Freddie Hubbard at his hard-bop best.

The two non-funk tunes, "Oriental Folk Song and "Sincerely Yours, are, from a purely compositional aspect, the most adventurous of Harrison's contributions to the session. The latter is a lush ballad revealing the overwhelming influence of John Coltrane on the saxophonist's musical development.

While The Survivor may not appeal to purists hoping for a return to the neo-conservative days of the Harrison-Blanchard quintet, it is a bold statement for Harrison who continues to look forward and push his music into fresh, unexplored territory.

The Survivor; Twerk it; Summertime; Cool Breeze; The Hook Up; Oriental Folk Song; Nouveau Swing; Sincerely Yours; Caravan (Who is the Funky Drummer).

I write about the following styles:
Beyond Jazz
Blues
Latin
Modern Jazz
Straight-ahead/Mainstream