Maximize your visibility at All About Jazz by upgrading your musician page from standard to premium. With it, you'll receive All About Jazz home page exposure, a highly stylized / ad-free musician page with bonus features and benefits, an ad, plus you control where you sell your music and so much more.
Learn More
330

BY JOHN KELMAN
November 1, 2007
Sign in to view read count 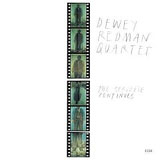 While he'll likely be remembered more as an avant-garde/free player, Dewey Redman was equally at home with a jazz waltz or a soulful blues as he was more experimental fare. The late tenor saxophonist made this crystal clear on 1982's The Struggle Continues, but it's never been available on CD until now. It's an album that proves you can't deny your roots, even as Redman takes many of them and gives them the slightest of twists.

Redman played with free jazz progenitor Ornette Coleman from 1967 through 1974, then teamed up with pianist Keith Jarrett's undeniably Coleman-influenced "American Quartet until 1976. Both gigs should have propelled him to greater fame, but perhaps it was the overwhelming dominance of both groups' leaders that prevented Redman from more popular acclaim as a broad-minded player with a robust tone.

The Struggle Continues starts where one might expect. "Thren is a Coleman-like blues—knotty, with bassist Mark Helias and drummer Ed Blackwell swinging hard as pianist Charles Eubanks sits out during Redman's solo, leaveing the saxophonist plenty of maneuvering space. Things move farther afield during Eubanks's solo, as Helias and Blackwell lock into a pedal point that drives the tension even higher. That Eubanks—brother of better-known trombonist Robin and guitarist Kevin—has remained well below the radar is a shame, as he's a strong foil for Redman.

Things become more unpredictable on the ten-minute "Love Is. Beginning with a dramatic flourish, it soon morphs into an elegant ballad that alternates between a straight 4/4 feel and what feels like a jazz waltz except, by staying in 4/4, means a dropped beat every third bar. Still, it all feels organic. Redman plays with economy and grace, supported by Blackwell's equally understated brushwork and Helias' firm pulse. Helias delivers an impressive solo that manages to retain forward motion with Blackwell while being just as lyrical as Eubanks' preceding solo.

Coleman and Redman both grew up in Fort Worth, Texas and cut their teeth on the R&B circuit, which Redman alludes to on the soul-drenched "Turn Over Baby. "Joie de Vivre is straight-ahead swing, while "Combination is a burning, up-tempo "time/no changes piece that's provides a more outré context for short but potent solos from everyone—especially a fiery exchange between Helias and Redman that leads into Blackwell's best solo of the set.

The disc ends on a mainstream bebop note with Charlie Parker's aptly (but not intentionally) titled "Dewey Square. Despite the occasional extreme, The Struggle Continues is one of ECM's most "in the tradition records outside of Jarrett's Standards Trio. Further evidence that the "ECM Sound has nothing to do with style or approach; it's another title from the ECM catalog that's long overdue on CD and proves Redman as a player underrated in life, but who will hopefully receive the attention he deserves posthumously.