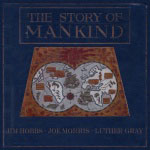 There are numerous precedents for alto sax-bass-drums trios, and it's to the credit of this one that they manage to stake out their own territory in a well-populated area. Whilst the music they make is rooted in free bop territory they also have no qualms about covering more rarefied ground and the results are by turns compelling and individual.

Their collective cause is served in no small part by the eloquence of alto saxophonist Jim Hobbs.. Whilst he has something of Jemeel Moondoc's rhythmic flexibility, the tartness of his sound is entirely his own, particularly in the horn's middle and lower registers. He's also not a musician who feels compelled to come up with seemingly seamless lines. His work on the opening "Then a Genius Bethought Himself of the Use of Fire," gains its momentum from the way in which he deploys fractured, perhaps deliberately disjointed lines in the midst of Morris and Gray's rhythmic maelstrom.

Even when the mood is more reflective, as on "The Spreading of the Idea of Popular Sovereignty," there's still an ambience of kinetic activity. Thanks for this is in no small part due to the amount of ground Joe Morris covers on bass beneath Hobbs's braying fractiousness. Luther Gray's work here has the effect of giving the music momentum for all of its relatively low-key aspect.

Rhythmic vitality is to the fore also on "The Story of a Word," wherein the group echoes the spirit of the trio Ornette Coleman had with David Izenzon and Charles Moffett without uncritically aping its every move. Hobbs treads a fine line between injecting melodic impetus and employing his alto sax as a third voice in rhythmic service and again the results have about them that air of individuality that's never anything other than welcome.

It's no surprise that "Gunpowder" has its own incendiary quality. That stems largely from the tension the three musicians conjure up. Again Morris gives the music a momentum of which Hobbs certainly and Gray arguably seem to be in denial. As elsewhere, the resulting music hints not so much at a new vocabulary as it does a new form of interrelationship between rhythm and melody.

Then a Genius Bethought Himself of the Use of Fire; Lost in the Vastness of the Universe; The Story of a Word; Gunpowder; The Spreading of the Idea of Popular Sovereignty.