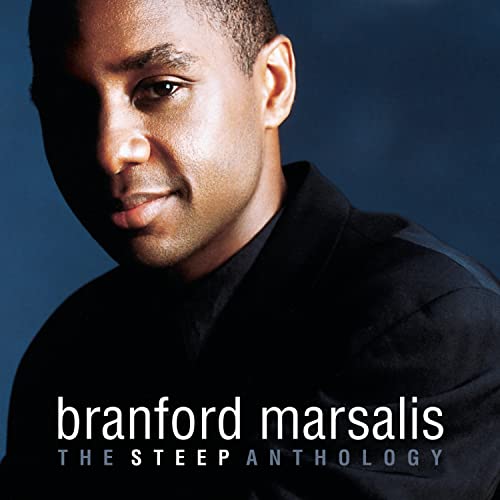 A fierce fighter as well as a gentle balladeer, Branford Marsalis makes every note count. He gets the meaning across naturally without unneeded repetition and without unnecessary embellishment. A true entertainer and a gifted artist, he communicates with his audience easily. Thus, Columbia had ample worthwhile examples to choose from for this anthology.

With his father at the piano, the saxophonist interprets “Maria” with passion and understanding. His control of the soprano instrument ranks right up there. Whether following in Sidney Bechet’s footsteps or emulating an operatic voice, Marsalis makes the instrument work as an extension of his physical presence. Monk provides inspiration for Marsalis’ tenor as he soars through “Evidence” with Kenny Kirkland at the piano, Robert Hurst on bass, and Jeff Watts on drums. The quartet pours it on. From a live session at the Village Vanguard, this piece wears emotion on its shirtsleeves. Marsalis is in his groove.

Good training helps. The Marsalis background is unique. But it’s Branford’s heart that wins out on these examples from his jazz career. His original “Spartacus” soars on a suite-like journey through distant lands with a cool outlook. His “No Backstage Pass,” from his debut album, takes the tenor on a similar trip. This one, without piano, draws its inspiration from Bird and Diz and Trane. Ron Carter walks the bass, as Marvin “Smitty” Smith rides the cymbals and snare. Marsalis puts what he learned on the bandstand with Art Blakey to good use.

With Wynton on trumpet, Branford converses through his original “Cain & Abel” in an up-tempo, New Orleans swing setting. Hurst and Watts contribute Crescent City shimmers, as the two Marsalis brothers work out their natural experience comfortably. Thinking alike, they provide a textbook solution.

At times moody and dark, at times traditional and light, Marsalis provides us with an eclectic program that buoys our spirits.