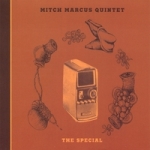 This quintet gets out of the gate with a ballsy no-nonsense mode of operations. San Francisco Bay Area saxophonist Mitch Marcus helps steer the way for his ensemble's progressive-jazz/fuzoid attack with the agility and timeliness of a rapid-response unit. Not for the squeamish, the preponderance of these works consist of snaky dual-sax choruses and blitzing guitar unison runs atop pulsating rhythms. Electric guitarist Michael Abraham adds a significant edge here via his rangy, distortion-drenched licks as the band uses space to its advantage.

On "Last Mourning, they generate a loose groove vibe, sparked by Marcus and fellow saxophonist Sylvain Carton. It's hot and nasty all-right, but bassist George Ban-Weiss tempers the flow some, during his extended solo, where the fireworks reemerge due to Abraham's wily, super-speed solo. In other regions of this outing, the quintet touches on free-bop along with little big-band like horn arrangements, and then toss in a few shades of Mingus for good measure. No doubt, Marcus and Carton loom as a formidable twin-sax attack. And with "G.C. they render a bump-and-grind motif, spiced-up by Abraham's close-handed chord progressions and harmonics.

Overall, The Special looms as one of the unanticipated surprises of 2007. In effect, this unit enjoys residing in the fast lane amid more than just a few, rapidly-accelerating turns and shifts in momentum.