Home » Jazz Articles » Xavi Reija: The Sound Of The Earth

Xavi Reija: The Sound Of The Earth

By Mark Sullivan
August 5, 2018
Sign in to view read count 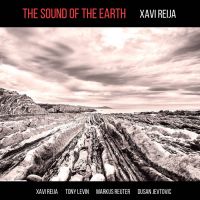 After the acoustic trio interlude of Reflections (Self Produced, 2017) Spanish drummer/composer/bandleader Xavier Reija returns to electric rock/jazz fusion territory, once again in the company of the extraordinary Barcelona-based, Serbian-born guitarist Dusan Jevtovic—his playing partner on several other MoonJune albums, most notably Resolution (MoonJune Records, 2016). The group is filled out by legendary American bassist/Chapman Stick player Tony Levin (Peter Gabriel, King Crimson) and German touch guitarist Markus Reuter (a band mate of Levin's in Stick Men, as well as a veteran of several MoonJune sessions). The set list includes compositions by Reija and Jevtovic, along with several collective tracks.

Reija's "Deep Ocean" makes a bold opening statement, its heavy riff reinforced by cymbal accents. After an exploratory series of solos, there is a wonderful dramatic pause before the theme returns—an early demonstration of the dynamic contrast that characterizes the session. The first of the collective "The Sound Of The Earth" tracks dials the intensity back with a quiet, atmospheric opening. Levin's bass line sets up the drum entry: before long the rubato feel has been replaced by a gentle groove, with Jevtovic's strangled guitar riding on top as the band builds to a climax—with lovely soundscaping for a brief tag. Jevtovic's "From Darkness" features call and response between the guitars over a thumping rhythm.

"The Sound Of The Earth II" begins with bass and drums (with brushes), a rhythmic bedrock for the overlapping guitar parts that follow. Reija's "Lovely Place" opens with Jevtovic's guitar, a contemplative sound joined by Reuter's overdriven solo line. Before long the piece develops into one huge buildup, with the guitar finally ending solo. "The Sound Of The Earth IV" is the longest of the collective improvisations, an exploratory trip that could have occupied an entire side on an LP. There is space for soundscapes, an expressive Levin bass solo, and lots of rubato playing by everyone. Which still leaves room for a big drum-driven climax.

The Sound Of The Earth is like a musical buffet, with something for everyone who has a taste for genre-crossing electric music. The Reija/Jevtovic pairing has a history to draw from, as does the Levin/Reuter axis—and the combination uncovers a real chemistry. Yet another magical MoonJune session.