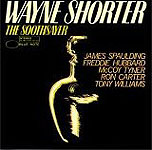 A good month for tenor saxophone connoisseurs, April 2008, with a second Rudy Van Gelder re-master released alongside Ike Quebec's signature Blue & Sentimental (Blue Note, 2008). The Soothsayer may be comparably less of a benchmark in Wayne Shorter's discography, and remains to some extent overshadowed by its close contemporary Speak No Evil (Blue Note, 1964), but it's a solid and enduring album—despite 15 years between the recording session and the original LP release.

Things were happening big time for Shorter in early 1965, when The Soothsayer was recorded. After five years with drummer and band leader Art Blakey as musician, composer and, finally, musical director, the saxophonist had recently joined trumpeter Miles Davis' second great quintet. With Davis, Shorter would record six studio albums over the next three years—the first, E.S.P. (Columbia, 1965) was recorded two months before The Soothsayer—plus a further four under his own name.

There was an embarrassment of Shorter riches around, and The Soothsayer was initially shelved to make way for the release of the more structurally adventurous The All Seeing Eye (Blue Note, 1965). When Shorter left Davis and joined Weather Report, The Soothsayer, temporarily, was overtaken by events. It was finally released in 1980.

The album finds Shorter in the company of two Davis quintet colleagues—bassist Ron Carter and drummer Tony Williams—together with pianist McCoy Tyner, then a member of saxophonist John Coltrane's classic quartet, trumpeter Freddie Hubbard and the relatively unsung alto saxophonist James Spaulding. Hubbard and Carter had been retained from Speak No Evil; Tyner had been featured on the earlier Shorter albums Night Dreamer (Blue Note, 1964) and Ju Ju (Blue Note, 1964). Spaulding and Williams were new recruits.

Shorter's virile playing aside, the album is worthwhile for the presence of drum prodigy Williams (Shorter's regular drummers of the time were Elvin Jones and Joe Chambers)—who turns in an inventive solo on "Angola"—and for the strength of Shorter's writing. The triple meter, medium groove "Lost," the opener, is quintessential Shorter of the period. Eight years before the release of The Soothsayer it was featured on Weather Report's Live In Tokyo (Columbia, 1972). "Angola," which follows, sounds like it could have been written earlier, for Blakey's band. The haunting "Lady Day" is a ballad tribute to singer Billie Holiday.

Of interest too is Shorter's re-arrangement of Finnish composer Jean Sibelius' pretty "Valse Triste"—on Speak No Evil, Shorter had credited Sibelius as a key inspiration for that album's "Dance Cadaverous." The word "deconstruction" may not have been common jazz parlance in 1965, but deconstruct is exactly what Shorter does here, sensitively and engagingly.