Asaf Sirkis & The Inner Noise: The Song Within 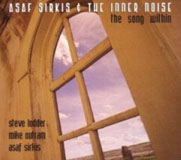 If Olivier Messiaen had written music with a pulse, it might have sounded something like Asaf Sirkis & The Inner Noise. The Israeli-born, UK-based drummer has been honing a personal vision with this trio for over five years, and The Song Within is the group's best disc yet.

Sirkis has retained a consistent line-up—church organist/keyboardist Steve Lodder and guitarist Mike Outram—from inception (a rare feat in itself), and this third release further solidifies its already distinctive approach. This continuation and evolution of the music on We Are Falling (Konnex, 2005) makes for a collection that, taken individually, is compelling enough, but is even more evocative when absorbed in its fifty-minute entirety.

The reference points remain broad. In addition to the Messiaen connection, there are distant roots in Tony Williams' Lifetime, although The Inner Noise balances raw power with greater finesse. There are references to ECM albums including guitarist Terje Rypdal's Descendre (ECM, 1980) and parts of saxophonist Jan Garbarek's Places (ECM, 1978). But Lodder's return to church organ as his primary instrument, coupled with Sirkis' turbulent drumming and Outram's flexible guitar work, creates a sound that's far removed from the conventional jazz organ trio tradition.

"When You Ask Why" begins on a more tranquil note, with Sirkis' harmonic references to Ralph Towner all the more evident in Outram's acoustic 12-string guitar intro with Lodder. But when Sirkis enters and Outram switches to overdriven electric, again supported by Lodder's church organ, this episodic piece turns more aggressive. Outram—who, along with John Parricelli, is one of Britain's most versatile guitarists—excels here and throughout the entire album. Lodder is an equally imaginative soloist who exploits the rich sound of the church organ to its fullest, playing with some reverence to the instrument's tradition but also demonstrating a rarely heard dexterity and exuberance.

An ever-inventive drummer, The Song Within remains as much about Sirkis the writer as it is Sirkis the player. "Nothingness First Part II, Love" is a beautiful solo composition for Lodder, as is the more dramatic "Theme for Gary," (written for drummer/keyboardist Gary Husband) and "Sweet Song," which ends the album on a near-spiritual note.

It's a challenge to distinguish oneself these days, but Asaf Sirkis & The Inner Noise is creating its own niche; an organ-guitar-drums trio like no other. The Song Within continues the precedent set on Inner Noise (Konnex, 2002) with Sirkis' best writing yet for a trio that has its own voice and continues to grow with each successive release.