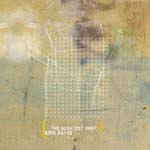 An intriguing mix of influences, Davis' singular pianism is never derivative. Subconsciously revealing her classical training, touches of Ligeti and Bartok hover in the margins of her phrasing. Gliding gingerly over the keys, extracting pleasingly unique melodies and harmonies, Davis invokes the graceful delicacy of Paul Bley and Keith Jarrett on "Jack's Song." Skittering up and down the keyboard with linear virtuosity on "Once," she pounds out harsh clusters and jarring blocks of sound as capably as Don Pullen or Marilyn Crispell.

Drummer Jeff Davis plays his kit with an alert responsiveness, less a traditional rhythm section accompanist than a creative colorist and spry agitator. Opsvik makes a great addition to the husband and wife team. His melodically assured tone and inventive phrasing provide just the right balance between freedom and form to support the shifting undercurrents of these intricate compositions.

Tony Malaby seems to appear everywhere these days. A chameleonic soloist, he has an uncanny knack for finding just the right sound for each and every session, from delicate lyricism to unhinged frenzy. Sumptuous swinging refrains on "35 Cents," impressionistic balladry on "And Then I Said" and rapturous, vertical caterwauling on "Once" reveal his sonic palette.

An exciting, imaginative new voice, Davis uses her self-effacing writing as a dynamic model of democratically balanced improvisational structures. The Slightest Shift is another document in the nascent discography of an up and coming new artist. Don't let this one pass you by.