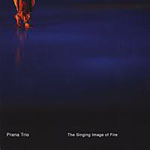 One of the great fallacies of modern education is that it chooses to ignore much of the past—especially when it comes to cultures alien to the one that is subscribed to. This cultural insularity has prevented the enjoyment of some centuries-old art that is particularly poignant in today's turbulent and finite times.

Fortunately there are a few fearless artists who approach the beautiful unknown with deep respect, awe and unabashed wonder, creating albums like The Singing Image of Fire. It's a profoundly exquisite work, in which Prana Trio grabs contemporary approaches to music by the jugular and dives with that art firmly held into the landscape of ancient and contemporary poetry.

The album glides across the ages, from Han Shan—the Tang Dynasty Chinese poet who straddled the 6th and 7th Centuries—and 7th Century Japanese mystic and poet Kukai to 8th Century Chinese court poet Wang Wei. Also represented are, among a few others rare and beautiful, the great Middle Ages Persian Sufi poets Hafiz and Jalaluddin Rumi, Indian mystic-poet Kabir and the venerable Shankarachyara. The Singing Image of Fire ends up awash with beauty on the shores of 21st century poetry by the celebrated Finn, Anselm Hollo.

If much of this poetic and Sufi content has remained hidden from contemporary times, it is perhaps because there are more walls than bridges between the ancient and the modern; the known and the hidden. And because of this—despite the extraordinary glasnost and progress experienced by musicians and music in the modern era—the challenge to approach it has appeared forbidding.

Ornette Coleman did just that when he employed the fluttering talent of vocalist Asha Puthli on his seminal exploration Science Fiction (Columbia, 1971), especially on "What Reason Could I Give"and the album's title track. Here, percussion colorist and intrepid musician Brian Adler makes these otherworldly proffering to the Divine, coaxing and urging vocalist Sunny Kim to sing ever upward in cloudy spirals to reach the deepest mystical communion with God. That Adler's musical compositions are exploratory in a questioning, non-judgmental manner is a perfect foil for the dramatic monologues of these mystic journeys works in the odd meters of his percussive approach.

Kim's spare and almost palpably plaintive approach to the poetry readings—whether sung or recited—strikes a tenuous, almost gossamer chord en route to the mystical union for which they strive. And with extraordinary work by the rest of the ensemble—especially pianists Carmen Staaf and Frank Carlberg, who tread softly as they dapple the music with glittering notes, and Robert Lanzetti's plaintive guitar on "Singing Image of Fire" and "In Our Idleness"—this collection of deeply meditative music strikes interior chords, where the heart and the mind's inner ear intersect, bringing the whole body alive.

The Drop and the Sea; Singing Image of Fire; Kangbyunsalja; Out Beyond Ideas; I Felt Love; Courteous to the Ant; Incredible Urge; Endless is My Wealth; The Man Who Wasn't There; In Our Idleness; Cold Mountain Path; Blindfolded.