James Falzone / Allos Musica: The Sign and the Thing Signified 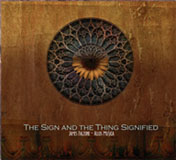 Clarinetist James Falzone finds the inspiration for his music in various sources, among them the study of signs and symbols. It is from this aspect that this CD gets its name.

Falzone brings several musical styles into his compositions. He is an articulate and interesting composer who utilizes the structure of classical music, the rhythms of Klezmer, the spark of polytonality and an abandon witnessed in free blowing to build a vibrant body.

Arkasia captures these elements for a stunning statement. The calm opening gives the lie for what is to follow, but it is also the factor that shows how Falzone can mould music. The structured bowing of the strings flows into the strains of Klezmer music from Falzone. The calm is gradually churned by Falzone and by bassoonist Katherine Young with a torrid spin of free blowing. As sound flows and ebbs, stops and then finds a gush, the effect is stunning.

"The Tipping Point prances in on the bass of Brian Dibblee and the drums of Tim Mulvenna. The music is scintillating as Falzone plays sweet, short notes and then holds a conversation with Young. But it is also the rhythm section that plays a significant part in the impact, lending depth and crispness. "Ten Months is another stylistic exposition of dual approach. Form, initially scuttled, finds a measure of cohesion from Falzone and Young, but Mulvenna takes it out with some hard drumming and broken rhythmic pulses.

Falzone and Allos Musica make for an alluring musical journey.