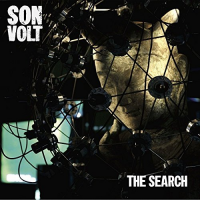 The reissue of Son Volt's The Search on both CD and vinyl configurations ties up loose ends in the seminal Americana band's discography, but, more importantly, it documents Jay Farrar's earliest departure into variations on his fundamental style of writing and recording. In doing so, it reaffirms his status as one of our most insightful and articulate composers, both as leader of this band and as a solo artist.

Even though both rhythm and solo guitars remain notably dominant here, as on the title song, the prominence of keyboardist Derry deBorja's piano and organ, echoing mid-Sixties electric Bob Dylan on "Carnival Blues," add new colors to the sonic design of Son Volt here. Other risks of eclecticism pay off as well: the punchy soul horns on "The Picture," for instance, are a logical extension of Farrar's roots-oriented expeditions in the wake of his ground-breaking work with Uncle Tupelo (the group he co-led with Wilco's Jeff Tweedy), besides calling to mind the exalting arrangements fashioned by Allen Toussaint for The Band on Rock of Ages (Capitol, 1972).

The varied arrangements applied to material such as the gospel-inflected "Bleed The Line" also stretch Farrar's vocals in ways that allow him to sound less stoic and more human. As vivid as are the lyric images throughout (confirmed by the wise inclusion of the words in the enclosed booklet), the penetrating introspection of songs like "Satellite" are hardly so abstract as the cover images of this eye-opening artwork. Some of the other twenty-two song titles such as "Phosphate Skin" or "Exurbia, " "Action" and "Circadian Rhythm" stipulate Son Volt as a modern-day extension of the groundbreaking efforts of The Byrds and early Neil Young in the so-called 'alternative country' realm.

In addition to the regular compact disc release of 2007, vinyl and iTunes versions of The Search were also released, including eight additional tracks from the same recording sessions. Originally titled On Chant and Strum, this content is, interestingly, integrated for this reissue within the fourteen cuts of the album proper, thus necessitating the second discs in packages of compact disc and vinyl LP. The remastering enacted for this release restores some of the fidelity missing from earlier configurations. Equally importantly, numbers such as "Waking World" and "Coltrane Free" broaden the perspective on Farrar's entire body of work. At the same time, the simplicity of "Slow Hearse," abbreviated as it is, grounds the experimentation prior to its closing the collection.

For all intents and purposes, this deluxe package becomes a distinct piece of work by Son Volt. As such, its restoration of an out-of-print title into the marketplace transcends purely commercial terms, so its success (or not) on that front may well presage a similarly-conceived, expanded version of Okemah & The Melody of Riot (Legacy, 2005) (for which there's a wealth of varied content apart from its Record Store Day 2018 vinyl release).

Jay Farrar's prolific creative output, as an individual and bandleader, deserves the most comprehensive possible availability.