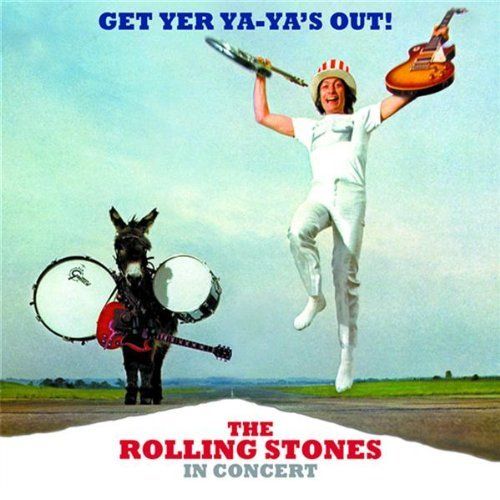 What is the measure of a great live music recording? That answer would be intellectual brevity, spontaneity and invention. A better illustration would be examples of poor live recordings. Ergo, Led Zeppelin's The Song Remains the Same (Swan Song, 1976) and The Eagles Live (Asylum, 1980). The former is certainly full of the invention part, too much of it, in fact. The Song Remains the Same was guitarist Jimmy Page's masturbatory opium dream full of noodling around and self-pleasing aggrandizing (translation: "boring"). The Eagles Live was rote out of the studio without nary an original improvisatory thought save for the predictable "Seven Bridges Road." Subsequent live releases have not improved on this formula since the Eagles incorporated and became businessmen.

The best live albums are from those bands just hitting their stride and still hungry to succeed. In 1969, the Rolling Stones were strutting up to the end of that turbulent decade, ready to swan-dive, elegantly wasted and flipping us off, into the next. Get Yer Ya-Ya's Out! is the center fulcrum supporting the Rolling Stones' most creative period (1968-1972), which produced five landmark albums: Beggars Banquet (Decca, 1968), Let It Bleed (Decca, 1969), Get Yer Ya-Ya's Out! (Decca, 1970), Sticky Fingers (Rolling Stones Records, 1971) and Exile On Main St (Rolling Stones Records, 1972). This period of creativity eclipses all bands contemporary with the Stones during that tumultuous period.

Ya-Ya's was recorded live at Baltimore and New York City (Madison Square Garden) November 26-28, 1969. This was about 2 weeks previous to the ill-fated Altamont Free Concert on December 6, 1969 where 18-year old Meredith Hunter was stabbed to death by members of the band's Hell's Angels security entourage. The Rolling Stones were touring in support of Let It Bleed which was officially released the day before the Altamont debacle. If rock and roll ever had innocence to lose it was lost at the end of 1969. The honeymoon from the 1967 "Summer of Love" accelerated to its inevitable and violent conclusion in this concert.

So, what bone is thrown to the faithful with this 4-CD/DVD set? From the quintet itself there is the original 10-song release, opening with the multi-layered introduction and a whirlwind "Jumpin' Jack Flash." Midway through the set is the terrifying and definitive "Midnight Rambler," perhaps the group's greatest concert piece, the show ending with "Honky Tonk Women" and "Street Fighting Man." A great live release considering the circumstances and technology of the early 1970s. Now, add to this five previously unreleased tracks reaching back to Out Of Our Heads (Decca, 1965)("I'm Free") and Aftermath (Decca, 1966) ("Under My Thumb") to Beggars Banquet (Decca, 1967) ("Prodigal Son") and Sticky Fingers ("You Gotta Move.")

These "unreleased" songs have been bootlegged since their recording but enjoy a grand sonic cleansing here. Guitarist Keith Richards' 1930s model National Steel-body resonator resonates evenly in the December air on "Prodigal Son" and "You Gotta Move." "Under My Thumb" begins its threatening evolution from marimba colored ditty to the menacing, misogynistic anthem it would become on 1982's Still Life (Virgin). "I Can't Get No Satisfaction," that Muddy Waters rip-off, comes clean as dangerous rock and roll. Guitarist Mick Taylor burns with fills. These pieces are reprised on the DVD along with some backstage film. A fine addition to the canon, but only the beginning.

Warming the New York crowd up before the Stones were B.B. King and Ike and Tina Turner. All their music contained on CD3 of the box set is previously unissued and it's what fully justifies this release. King's most famous live recordings, Live at the Regal (ABC, 1965) and Live at Cook County Jail (MCA, 1971) bookend this performance and find King at the height of his considerable powers, before he began paring his guitar solos to the bare essentials as Count Basie did with his piano playing. King's tone is full and rich. It is the tone that launched a million urban white guitarists. There would have been no Eric Clapton had there not first been B.B. King.

King's set included his mainstays, "Everyday I Have the Blues" and "How Blue Can You Get." His performance is seamless, one piece dissolving into the next, his guitar by turns fiery then tender. The band is tight and the energy level high. That energy was picked up by Ike and Tina Turner, whose seven song set surveyed the musical landscape of the period, mining Otis Redding, Wilson Pickett and the Beatles. This is not the slick Tina Turner, sans Ike, of the 1980s. This is the raw element just out of Nutbush. Her performance of "Son Of A Preacher Man" comes halfway between Dusty Springfield's landmark recording in 1968 and Aretha Franklin's reconsideration in 1970, eclipsing them both by light years.

Tina Turner's searing performance of Otis Redding's "I've Been Loving You Too Long" is downright chilling retrospective to her well-publicized marital problems with Ike. Nevertheless, her performance is not merely sexy, it is nakedly carnal in a way that makes Donna Summer's 1975 "Love To Love You Baby" sound like a convent hymn. Get Yer Ya-Ya's Out! The Rolling Stones In Concert (40th Anniversary Deluxe Box Set) anticipates a similar edition for Exile On Main St. To coin a phrase: Hallelujah, I Love It So.


Tracks: CD1: Jumpin' Jack Flash; Carol; Stray Cat Blues; Love In Vain; Midnight Rambler; Sympathy For The Devil; Live With Me; Little Queenie; Honky Tonk Women; Street Fighting Man. CD2: Prodigal Son; You Gotta Move; Under My Thumb; I'm Free; (I Can't Get No) Satisfaction. CD3: Everyday I Have The Blues; How Blue Can You Get; That's Wrong Little Mama; Why I Sing The Blues; Please Accept My Love; Gimme Some Loving; Sweet Soul Music; Son Of A Preacher Man; Proud Mary; I've Been Loving You Too Long; Come Together; Land Of 1000 Dances.