Home » Articles » Albare: The Road Ahead

By Glenn Astarita
October 10, 2013
Sign in to view read count 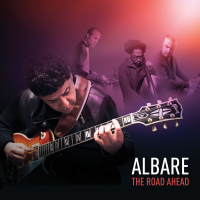 Moroccan born guitarist Albere (Albert Dadon) emigrated to Australia at the age of 27 and blossomed into a celebrated jazz guitarist who also directs the Melbourne Jazz Festival amid other jazz-related endeavors. Here, he focuses on melodic textures via a breezy gait, employing a synth guitar and six-string electric while exhibiting an unhurried or building-block approach to soloing. To some extent Albare is a polite guitarist who doesn't plunge into super-speed technical gymnastics. The majority of these pieces are executed with slow to medium tempo cadences. However, his musical presence is broadened by a touch of reverb that casts a halo of sorts.

Many of these comps are designed with flourishing thematic frameworks such as, the blustery Latin-jazz treated "The Gift, where each member of the band strut their stuff during climactically oriented solo spots. The guitarist employs tuneful inflections and places subtle emphasis on primary motifs. Appropriately, "Heart of Heart" projects warmth and tenderness, but the ensemble works within variable grooves, including a Bossa Nova segment and a soft shuffle beat. Albare's over-the-top choruses include colorful trills and treatments like a painter meticulously crafting a work of art.

Pianist Phil Turcio launches "New Signs" with a brisk solo and graceful line of attack, driving the band into an up-tempo gala, teeming with paradigm shifts and variable levels of intensity. They generate some high-heat during the bridge and conclude the album with "The Road Ahead Part B," highlighted by a loose sequence of developments and Albare's bluesy and ethereal choruses. Indeed, Albare crafts a signature stylization, largely within serene environs and harmonically attractive pieces, interspersed with a few thriving tracks, providing an improvisational forum for the musicians to engage in pulsating exchanges.