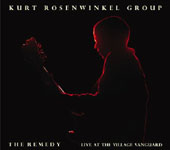 It's been a couple of years since Kurt Rosenwinkel's previous release, Deep Song (Verve Music Group, 2005). But as one of modern jazz's most dynamic guitarists, having earned respect and applause from critics and fans, he's back with the stellar double CD, The Remedy: Live at the Village Vanguard.

Recorded live and unedited at New York's historic jazz venue, it documents the guitarist and a fiery quintet with over 120 minutes of exciting music, successfully articulating the electricity and essence that sets him apart. On this occasion, the group comprises bassist Joe Martin, pianist Aaron Goldberg, drummer Eric Harland, and Rosenwinkel's longtime associate, tenor saxophonist Mark Turner. Here is evidence that they were a tight outfit at the Vanguard in 2006.

"Chords" (composed by Rosenwinkel on computer) begins the first disc. The sharply defined melody and ethereal setting, is counterbalanced by a marvelous swing. Martin and Harland inhabit a deep rhythmic groove and support the labyrinthine changes. Goldberg's playing is also on point, expanding the intricate tunes, allowing Turner and Rosenwinkel open paths to explore.

Rosenwinkel's penchant for harmony, atmosphere and odd tempos is heard throughout, on the title piece and "Flute," an episodic tune that slowly expands into full blown groove-swing. Goldberg piano soars, then Turner brings things down to earth with his lush tenor as Rosenwinkel cements the tune with his signature (slightly processed) fusion-toned arpeggios and lightning quick soloing. Sounding like a new age combo of guitarists Wes Montgomery and Alan Holdsworth.

Though differing textures and styles, Turner and Rosenwinkel have a symbiotic music relationship that has spanned many years. Their voices contrasted: Rosenwinkel's almost five minute solo-chord intro on "A Life Unfolds," followed by Turner's soulful and almost weeping sax.

The second disc opens with the cascading movements of "View From Moscow" a 12/8 thrill ride that is completely satisfying. Other memorable moments include the feel good modal blues of "Safe Corners" with another lengthy intro from Rosenwinkel and his wordless (scat-like) soloing.

The double CD closes with the smoking "Myron's World" written by Turner from his 2001 release, Dharma Days (Warner Bros., 2001). Turner sets things up with his own four minute sax intro, a distinctive post-Coltrane sound—fluid, thoughtfully inquisitive and soulful. The band then ups the ante, strongly, with hard swing and imaginative solos, including creative sticks by Harland, proving once again why he's one of the hottest young drummers around.

There are many variables that can make live recordings "imperfect." Band issues, sound problems, post edit cuts, and so on. But from start to finish The Remedy is a total success showing the potential of "music in the moment." It may very well be "the remedy" as Rosenwinkel has stated.