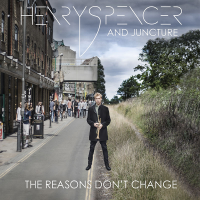 The cover art is a clue to the music contained in this excellent album. It depicts a vista split in two, one half a deserted bucolic scene and the other a populated urban street. In the midst stands trumpeter and progenitor of this work, Henry Spencer, a graduate of the UK's prestigious Guildhall School of Music and Drama.

The bifurcated opening track is introduced by a restrained fifty second trumpet solo, building-up to a sustained B flat note which instantly precipitates the second section "Hindsight Can Wait," a dramatic ensemble melee set over an ascending four chord structure. The tension and release device Spencer utilises here is indicative of his intelligent approach to his compositions and arrangements which bestrew this album.

"On The Bridge" gradually builds to a stately crescendo and in the process reveals a terrific solo from Spencer. "Eulogy (Goodbye Old Chap)" is underpinned by a memorable repeated phrase and some more vibrant soloing from Spencer. "Joanne's Diary" is introduced by resonant Hank Marvin / Duane Eddy twanging guitar from Nick Costley-White, of the type rarely heard in jazz but which here works remarkably well. Costley-White is a guitarist who is as comfortable (and competent) with conventional jazz runs as he is with electrifying Robert Fripp-esque rock statements. Just listen to his elegant solo on "Knock Back, Knocked Forward."

The pastoral "Never Draw A Line" contrasts sharply with the stinging guitar motif on "Still Open To Confusion." "Remember Why" is a classic example of how this record succeeds, simply by allowing breathing spaces for languorous yet perfectly balanced solos, here offered by Matt Robinson and Costley-White once again. On "Still Open To Confusion," its immediately engaging riffy rock guitar intro is leavened by Spencer's warm horn tones.

As an added bonus, The Guastalla Quartet features on the final two tracks, "Hopeless Heartless" & "The Survivor & The Descendant" subtly imbuing the tracks with even more warmth but without diluting their power. This highly accessible and brilliantly cohesive debut album emanates from an exceptionally talented group of musicians and a leader from whom we shall undoubtedly hear much more. A truly gorgeous record and maybe even an early contender for album of the year.