Home » Jazz Articles » Falkner Evans: The Point Of The Moon

Falkner Evans: The Point Of The Moon 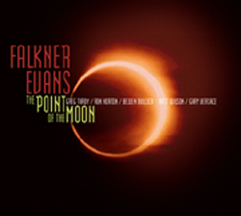 It is natural to equate a bit of hubris with jazz, but pianist Falkner Evans checks his ego at the door on The Point Of The Moon.

Like his previous trio session, Arc (CAP, 2007), he returns with bassist Belden Bullock and drummer Matt Wilson, but supplements things with the horn frontline of tenor saxophonist Greg Tardy and trumpeter Ron Horton. If it weren't for Evans' name on The Point Of The Moon's cover, it might not seem like his release.

He did, though, pen seven of the nine compositions heard, and also arranged the horns. Like his previous efforts, he displays an inborn sense of swing that fosters an unceremonious harmony in this ensemble. The opener, an Art Blakey-esque march called "Altered Souls," incites with Wilson's rolling introduction of the frontline horns that only slows a bit for Evans to solo, then back to the trumpet and tenor party.

Certainly, Evans writes to the strengths of his players. Tardy's tenor lushness and the soft sound of Horton's trumpet (often mistaken for a flugelhorn) are featured on "Drawing In," and on the modish and snappily arranged standards "O Grande Amor" and "While We're Young." It's just that he constantly downplays his playing. He even employs a fellow keyboardist, Gary Versace, on two tracks. Versace adds organ to the bluesy track "Off The Top," mixing with both Evans and the horns, switching to accordion for the title track. Both are examples of Evans recruiting players for a certain sound. The blues are smoothed out by the note-perfect Tardy, and Wilson's sense of swing is always spot-on.