BY GENO THACKARA
December 4, 2021
Sign in to view read count

It's a milieu that still enjoys plenty of devotion, and musicians (especially jazz players) are no strangers to realizing ideas that seem practically impossible.

It's faintly amazing to be able to talk at all about big-band recordings—plural—emerging during an ongoing pandemic with no end in sight. Nonetheless it's a milieu that still enjoys plenty of devotion, and musicians (especially jazz players) are no strangers to realizing ideas that seem practically impossible. Here we have scores of them willing to keep the tradition alive, whatever the difficulties. 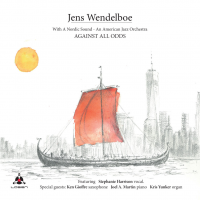 You'll be disappointed if you're hoping for a brisk swinging Phil Collins cover or two, but the hearty party of Against All Odds still offers plenty to like. While a casual listener could easily believe Jens Wendelboe had simply booked a studio for nineteen players and a vocalist, this is a collage that took months to come together. The rhythm section set down the basic tracks just before 2020's first shutdown, and so there was an organic foundation to follow. The horn players were then able to do their thing in groups of four staggered weeks apart, with various others recording more bits and pieces at home.

Logistics aside, the finished product bounces as brightly as it was always meant to in person. Wendelboe's compositions show as much soul as you'd expect from someone whose R&B pedigree includes Donna Summer and Earth, Wind & Fire. The collective breezes through brisk-paced Latin dance, cheerful march and urban funk jam with equal aplomb. If "Chasing Rainbows" feels out of place because it really belongs in an animated Disney film instead, it's still rendered with the wide-eyed sincerity it deserves. Likewise, this whole hour makes it easy to simply enjoy the results and forget the "odds."

Chuck Owen and the Jazz Surge
Within Us
Mama Records
2021

Chuck Owen and his Jazz Surge ensemble were too thrilled about their silver anniversary to let any practical issues get in the way of celebrating, especially since the occasion came at a point when it was becoming safer to (carefully) come together after a long time in isolation. If everyone was especially overjoyed to be playing together for the first time in over a year, Owen's program was perfectly arranged to support them.

There are a couple old staples to mark the milestone, such as Miles Davis' "Milestones" (chosen for just that reason) and a high-spirited opener from Owen's influence and colleague Chick Corea (who would have appeared on the track himself if not for his passing a couple months before the recording). While those are fun additions, though, it's the leader's own pieces that colorfully carry the day.

Corea's jaunty "Chelsea Shuffle" glides right into the quasi-folky "Trail of the Ancients," which evokes sunny mountain paths with breezy strums and silky gypsy fiddle. When Sara Caswell's violin next appears a couple tracks later, it's alongside some juicy electric fusion guitar instead. The arrangements heartily swing and sometimes flat-out sprint with every player in joyous unison, and even the odd spot of club noir doesn't dampen the tone. From bop to funk to folk, the good times never stop rolling. 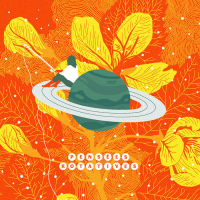 Perhaps unexpectedly for such a large ensemble, the celebration here is one of the subtle sort—as the title suggests, Theo Girard's music leans to the pensive side, and so this is a band that wanders and glides rather than stomps. This live outing draws on two decades of past material originally developed in many smaller and quieter contexts. Though it took a fair amount of adjusting to arrange it all for more than a dozen horns, Girard and his "rotative" crew of longtime friends keep the attitude of restraint even while livening it up.

This isn't to say that you can't clearly hear the happiness. The mid-set "Interlude" has the collective coalesce out of some free abstraction to eventually wind up in bright street-parade mode. "Roller Coaster" has Girard's trotting bass traipsing up and down while the others take turns jumping in and out of the framework. The rhythm players spend much of the set often seesawing between drift and groove, so the brass section's playful interactions can gradually build up steam to make the livelier moments feel that much more intense when they break out. If Pensées Rotatives would be tricky to dance or tap your toes to, the spirit doesn't feel any less bright because of it.

Tracks: After the Snow; Triplet Whisky; Chasing Rainbows; Geriatric Gymnastics; In the Beginning; Decaffeinado Again; Return from Forever; Frank's Funky World #3; A Weekend in Oslo; Erobrern (The Conqueror); Inside Out; Sulla-Tulla.