By Stephen Latessa
June 8, 2006
Sign in to view read count 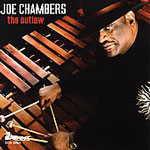 The Outlaw is an adventurous recording which finds veteran drummer Joe Chambers focusing on vibraphone, piano and marimba as much as the drum kit. In the liner notes, Chambers comments, "I'm not interested in playing drums behind anybody now. On this album, I'm trying to reestablish myself as a mallet player. Unfortunately, the album also reveals an interest in synthesizers that lend the music an artificial sheen which comes perilously close to smooth jazz.

The version of the Janet Jackson hit "Come Back To Me doesn't add anything to the original. With its electronic instrumentation and wordless female vocals, the track almost sounds like karaoke backing. The twinkling keyboards remind me of a soundtrack to a workplace safety video.

Vibes tend to work best when paired with knotty, almost off-kilter backing. When played with overly slick arrangements, they can seem too sweet and dulcet. "Bembe is one of the more successful tracks, framing the vibes over a dense percussion section with prominent dry shakers roughing away the shiny edges. The minimalism of this track is a direction which Chambers might have pursued with some success. Even the synthesizers that creep in are restrained enough to sound slightly ominous, instead of simply cheap.

Joe Chambers deserves credit for exploring new avenues, but more than a few of them turn out to be dead ends. His playing is expert as usual, but the arrangements and instrumentation are poorly conceived.