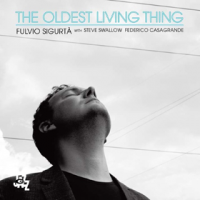 The Oldest Living Thing is trumpeter and composer Sigurta's sixth album as leader or co-leader, his fourth for the Cam Jazz label. He's also recorded with pianist Francesco Turrisi and as a member of Nostalgia 77. For this album he's joined by acoustic guitarist Federico Casagrande (who shares writing duties) and Steve Swallow on electric bass.

Sigurta and Casagrande form an empathic partnership and prove to be complementary in their writing styles. Both men leave plenty of space in their playing and compositions, generally favor slow tempos and, with the notable exception of the exciting rhythmic attack on "Loft," avoid any sense of urgency. Sigurta wrote five of the tunes, Casagrande composed four. Stylistically there's little to differentiate the compositions, the cool spaciousness both men bring to their writing giving their tunes more shared characteristics than differences.

Swallow provides a strong rhythmic foundation on tunes such as "Travel Back" and "Helichrysum." However, on "Sorrows And Joys Of A Lamb" and "The Olive Tree Of Noah" his electric bass seems to conflict with rather than complement the acoustic instruments, intruding into the calmness created by the other two players. The duo version of Sigurta's "The Oldest Living Thing" benefits from the absence of a bass, gaining a greater gentleness and serenity than the trio version.

The album's sole cover is an atmospheric version of Ennio Morricone's "Nuevo Cinema Paradiso." It's more dramatic than most of the tunes on The Oldest Living Thing but as with much of the album Sigurta's playing is relaxed and unhurried, Casagrande's is controlled but passionate.