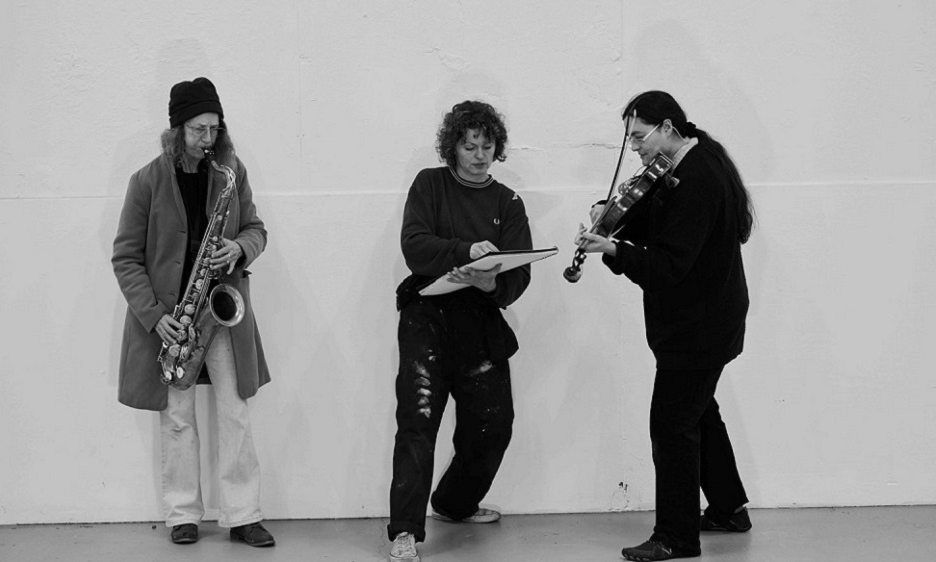 Noisy Women was started in 2020 by multi-instrumentalist Faradena Afifi and Marion Treby who both joined Glasgow Improvisers Orchestra during lockdown. The Noisy Women Presents is a quartet of Afifi and Treby plus improvising visual artist & dancer Gwendolyn Kassenaar, and vocalist & dancer Maggie Nicols. (Pictured above, left to right: Sue Lynch, Gwendolyn Kassenaar, Faradena Afifi.) This was the inaugural concert of a free improvisation music series in which quartet members will be joined by invited guests. They say this initiative celebrates diversity and creativity in music, with visual art forming part of the musical interaction. Although performers will not all be female at each concert (in March, guests will include Steve Beresford and John Edwards) that was the case for this concert, with the trio of Afifi, Kassenaar and Nicols being joined by trumpeter Charlotte Keeffe, saxophonist Sue Lynch and cellist Sofia Vaisman-Maturana. In passing, it is worth noting that Afifi, Beresford, Edwards, Keeffe, Lynch and Nicols are all members of London Improvisers Orchestra (LIO) which plays a monthly London gig..

In addition to the live audience at Hundred Years Gallery, this concert was also beamed out to others watching on Zoom or Facebook. The concert consisted of a trio set followed by one from the full sextet. After an interval, the players who were not in the first trio played a trio set, with the others gradually joining in for a final sextet. In a break with tradition, the initial trio was selected by audience members selecting names from a hat, resulting in Kassenaar, Lynch and Nicols playing the opening set. In the room, Kassenaar's easel and pastels were in a corner so as not to obscure the audience's view; an enlarged image of her work in progress was projected onto a wall behind the musicians so they and the audience could see it. The easel had contact mikes attached so Kassenaar's every move contributed a sound. In the centre of the stage was a large sheet laden with pots and pans, bowls, coat hangers and a viola—Afifi's instruments of choice— which players had to work around. All the signs indicated this would be no ordinary concert...

The opening trio was into its stride straight away, with Kassenaar sketching the other two while also moving to the music they were producing; Nicols sang and danced, occasionally passing comment on whatever came into her head—as when she attempted to lean over backwards but had to abandon that and lean forwards instead, "I used to be able to go all the way back." Although there was an obvious connection between Kassenaar and Nicols, it did not dominate the set, and Lynch contributed equally to the success of the trio, interjecting fluent tenor sax phrases which fitted well with the others. The set came to a rather premature end when Nicols questioned out loud whether the trio had finished its slot, leading to a period of uncertainty before slowly ending; Nicols' comment on this was in character, "Tidy endings are so last century..." Fortunately, the sextet set which followed displayed all the musicians' variety of talents without them getting in each other's way. Afifi opened with some percussion on her pots and pans. Vaisman-Maturana's cello entered and slowly built up an atmospheric background, with Afifi adding vocals and bowed sounds from her bowls. Keeffe played a prolonged trumpet passage which further enhanced the soundscape without overcrowding it. Throughout, rather than soloing, all six members contributed to the overall atmosphere of the sextet's music. With no-one hogging the limelight, the end result was a collective success; it was a joy to watch.

After the interval, the trio of Afifi, Keeffe and Vaisman-Maturana employed subtly different skills to those seen in the sextet, Afifi beginning with movement and dance, one of her fortes, Keeffe playing flugelhorn and Vaisman-Maturana melodically underpinning the others. The three were equal sides of a triangle, each aware of the other two and responding sensitively to them, thus maintaining equilibrium between the three. As Nicols then Kassenaar and then Lynch joined in, it was fascinating to watch the slow and subtle evolution from a trio to a sextet. By the end, there were smiles on most faces, of performers and audience alike, reflecting the success of the concert and indicating that future The Noisy Women Present gigs will be well worth attending. Until then, memories of this one will still bring smiles to the faces of those who were present.