Mike Melito: The Next Step 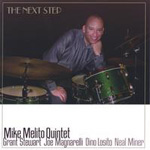 The Next Step is the third recording session led by Mike Melito, a Rochester, New York-based drummer who often draws on talent from the New York City jazz scene. To his credit, Melito doesn't hire players like trumpeter Joe Magnarelli, tenor saxophonist Grant Stewart, and bassist Neal Miner for the credibility their names bring to his projects. Rather, along with a fellow New York State mainstay, pianist Dino Losito, Melito finds exactly the right voices for his scheme: making affably swinging small group jazz rooted in the bop and hard bop traditions.

Though the record has its share of exhilarating moments, a spirit of moderation pervades the entire project. Melito is an increasingly rare trapster who guides an ensemble by laying down a firm beat on the ride cymbal, works closely with the bass line, offers hard accents in small doses only at key junctures, and shuns clamor or any gratuitous interaction. For instance, during the last four bars of Stewart's first chorus on "I Wish I Knew, Melito's brief, tightly knit pattern of hits to the snare and bass drums gives the music a jolt that lingers even after he draws back.

The material is a carefully chosen mixture of gems from the American Songbook and substantial originals by individual band members, as well as a version of Dexter Gordon's "I Want More. Both of the horns take a lot of care in playing the songs' melodies, sounding more heartfelt than cerebral. Stewart's suave rendering of "Don't Blame Me stays true to the original, even as he puts his stamp on it. Magnarelli offers a melancholic version of "Smoke Gets In Your Eyes that simultaneously evokes vulnerability and strength.

These eight tracks are filled with strong, individualistic improvisations that don't eclipse the impact of the group as a whole. Magnarelli's solo on his brisk bossa "Bella Carolina is a continuous flow of melodic invention, effortlessly moving from strings of bubbling sixteenth notes to brief reveries. Even as his pointed single-note lines leap from the keyboard, there's an element of ease and relaxation in Losito's 64 bars during a blazing, up-tempo version of "You Don't Know What Love Is. In synch with Miner and Melito's rock steady pulse, the pianist's speed and dexterity is tempered by phrases of differing lengths and varying degrees of stress, and he knows exactly when to end a phrase for maximum effect. About thirty measures into a concise, methodically constructed solo on "Blues For Red And Brown, Stewart cuts loose with an unexpected run of wildly careening triplets that signal a change in emphasis as he becomes more urgent and reaches for notes in the higher registers of the horn.