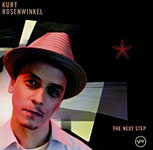 When you stop to think about it, there are relatively few guitarists on the current jazz scene working to go beyond the boundaries of a mainstream manifesto. Sure, you've got talented youngsters such as Russell Malone, Peter Bernstein, and many others functioning within the tradition. But even as endowed as these guys are, they have not chosen to see outside of the box in the same manner that Pat Metheny and Bill Frisell have. This is not to dismiss the talents of anyone with something important to say regardless of the medium, just to put into context the fresh perspective of Kurt Rosenwinkel, a major talent who has dwelled in obscurity for far too long. A regular of the downtown crowd and mainstay at the New York jazz club Smalls, Rosenwinkel has the ability through a major label recording contract to now bring to a wider audience the sound that has heretofore only caught the ears of a privileged few.

Following up on a debut set for Criss Cross and his first Verve side, The Enemies of Energy, Kurt's The Next Step is so aptly titled that it's downright scary. This proves to be the perfect forum for the guitarist and composer as he lets it all hang out over the course of eight clever originals. What's so hip is that as quirky and downright odd as Rosenwinkel's tunes can be, they also have a beguiling quality that rings true. After just a few introductory spins, I spent the rest of the day with the lead off tune "Zhivago" turning around in my brain. Additionally, the axiom that a working band develops along lines quite superior to that of your typical jam session is brought home due to the fact that Rosenwinkel has been seen regularly with this group for some time and his relationship with tenor saxophonist Mark Turner goes back to 1994.

There's something to be found in each of the guitarist's lines (and the nuances keep appearing after many exposures), yet it wouldn't hurt to touch on a few points of intrigue. "Filter" is a prototypical chart, full of jagged melodies that dictate phrase length and bar lines. Collective banter between Turner and Rosenwinkel becomes heated, leading to a dramatic solo statement from drummer Jeff Ballard. Several tunes find Kurt singing along with his guitar lines, adding another dimension to such cuts as the previously mentioned "Zhivago." Man of many hats, Rosenwinkel puts down the guitar and sits at the piano for the title romp, changing gears at its conclusion with a catchy shuffle beat.

Only time will tell, but it seems fairly certain that Kurt Rosenwinkel stands on the verge of becoming the next major innovator in the lineage of jazz guitarists, picking up where Bill Frisell left off and taking us far into the 21st century.