Various Artists: The New Basement Tapes: Lost on the River 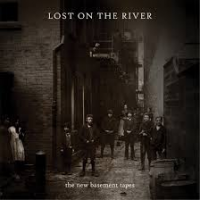 Suspect as its concept appears, at least at first, The New Basement Tapes: Lost on the River is another entry in the remarkable creative canon of Bob Dylan. And though the man himself does not perform here, he was nevertheless (in)directly involved: he had to give permission for the usage of a clutch of his lyrics from 1967 uncovered during exhumation of material for his 'Bootleg Series' of archive titles.

And if the presence of T-Bone Burnett gives pause—notwithstanding his successes in the marketplace, he's adopted a formula for himself in producing other artists such as Gregg Allman—remember he was a member of Dylan's 'Rolling Thunder Review' band in 1975 and 1976, so he has an angle all his own on the execution of this project. As do the participants themselves, each of whom took turns, alone together and in various combinations, composing music to match the words for far more than just the twenty tracks that appear on the 'Deluxe Edition' CD: My Morning Jacket's Jim James, Elvis Costello. Taylor Goldsmith from Dawes, Marcus Mumford from Mumford and Sons and Rhiannon Middens from the Carolina Chocolate Drops.

What's immediately striking about Lost on the River, apart from the obvious cache of the cast and the direct reference to the album title in the Jim James opener "Down on the Bottom," is an ambiance like the noir near-sepia cover image arising from the track, a combination of the angst in the song itself, but more so in the performance of the band: the palpable unity arising from musicians' chemistry permeates this cut, keynoted in the striking, assertive bass lines from Goldsmith as he plays an instrument he doesn't usually use in his own band.

As described in numerous interviews that took place upon the album's release, largely in lieu of live performances, the give and take of spontaneity in the assumptions of roles as writers and players informs The New Basement Tapes. That, in turn, is no doubt the foundation of a diversity of style and arrangement in which blistering electric guitar the likes of which appears on "Kansas City" becomes of a piece with Giddens' banjo on "Spanish Mary." Likewise, her haunting voice there sounds like the corollary of the pinched delivery Costello utilizes on "Married to My Hack."

The latter tune's tongue-in-cheek air alone is sufficient to undermine a solemnity that might otherwise weigh down this whole project, but it also reminds what an undercurrent of humor pervaded Dylan and The Band's own 'Basement Tapes.' More dominant, however, is the ever-so-serious vulnerability radiating from Goldsmith's voice on "Liberty Street:" it's enough to counteract the conventionality of the arrangement but also, and much more importantly, imprint his personality on this endeavor as a direct import from his leadership of Dawes, where his resolute stance often calls to mind a young Bob Dylan.

Such an absence of self-consciousness adds to the credibility of the other participants here as well, making the stripped down acoustic quartet of Costello, James, Goldsmith and Mumford sound like an entity unto themselves as well as part of the larger whole. Credit has to go to Burnett for shepherding the varied collaborations of composing and recording Lost on the River, not so much keeping egos at bay, but maximizing the confidence of all involved to find their level and assume the role(s) that best serve tunes such as "When I Get My Hands On You." (which may well eventually elicit its own cover versions).

In the most practical sense of sequencing tracks too, Burnett's created an engrossing flow in juxtaposing cuts like the abandoned Giddens-led romp of "Duncan and Jimmy" with a more subdued poignant number titled "Florida Key." The seamless quality of The New Basement Tapes becomes progressively apparent too as the twenty tracks unfold, perhaps no more so than here where banjo that led the first track moves forward from the background of the second of these aforementioned numbers. The wisdom of Burnett's choices and that of the band itself becomes redolent with the addition of five songs more than the 'standard' version (in the most obviously democratic decision, effectively one song less per artist.

The irony here, logical as it ultimately seems, is that formulating a two-LP vinyl configuration led to the alternate configurations, but the corresponding cuts comprise only an arguable embarrassment of riches. The James -led "Hidee Hidee Ho" carries the spirit of devil-may care bliss, while the one Giddens fronts has a menacing tone that turns the title into a voodoo chant of sorts. Meanwhile, "The Whistle in the Street" is simply not memorable, which only makes "#20" take of the title song an effective conclusion on its own as well as a valid counterpart to "#12."

If the same discerning eyes and ears are applied, subsequent releases from the spring 2014 recording sessions at Capitol Studios have all the potential to be as thoroughly arresting as this initial title, not to mention reaffirming the project as a viable companion piece to similar tributes to Bob Dylan's hero Woody Guthrie, the Billy Bragg/Wilco endeavor Mermaid Avenue (Nonesuch, 2012) and the more recent New Multitudes (Rounder, 2012) effort.

Down On The Bottom; Married To My Hack; Kansas City; Spanish Mary; Liberty Street; Nothing To It; Golden Tom – Silver Judas; When I Get My Hands On You; Duncan and Jimmy; Florida Key; Hidee Hidee Ho #11; Lost On The River #12; Stranger; Card Shark; Quick Like A Flash; Hidee Hidee Ho #16; Diamond Ring; The Whistle Is Blowing; Six Months In Kansas City (Liberty Street); Lost on The River #20.