By IAN PATTERSON
October 14, 2008
Sign in to view read count 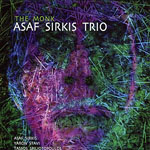 One thing that has perhaps been understated in some quarters when considering drummer Asaf Sirkis' recordings as a leader is just how lyrical and understated his music tends to be. The Inner Noise recordings, which aligned drums and guitar with church organ, drew almost as much attention for the unorthodox nature of the trio as they did for the music itself, which is as subtle as it is expansive. It is also quietly melodic and vaguely uneasy at the same time. On The Monk, an album of shades and contours, these same qualities are much to the fore.

The album opener, "Stoned Bird," revolves around simple, melodic guitar chords and Sirkis' animated drumming, which is always hugely impressive, yet in no way overbearing. There's plenty of space for guitarist Tassos Spiliotopoulos and guest keyboardist Gary Husband to solo before the song closes with a very lyrical, measured contribution from bassist Yaron Stavi. Both Spiliotopoulos and Husband play within themselves, but with an edge that lends the tune a slightly dark tone. Husband's playing, here, on the title track and "Dream," owes a debt to the late Austrian keyboard maestro, Joe Zawinul.

On "The Bridge," Husband takes to the piano, revealing an almost classical deftness of touch and a wonderful ear for melody. At just under two minutes it is a lovely miniature which acts as a kind of pause at about the half-way point on the album.

"Without a Story" starts with a moody guitar voicing, gradually giving way to a King Crimson-esque improvisation, an impression heightened by Spiliotopoulos' Fripp-like sustain, rumbling bass, and by Sirkis' cat-o'-nine-tails stick work. His rolls, alternately crashing and sighing cymbals—a near constant characteristic of his style—and use of triangles and bells, sound like drummer Bill Bruford and percussionist Jamie Muir of Crimson fame rolled into one. Sirkis' long-term employer, saxophonist Gilad Atzmon, has described Sirkis as the best drummer in the world, and without wishing to kick off a pointless debate, suffice it to say there are occasions, when listening to his playing, where it sounds like he must have a third hand.

On the nostalgic "Alone," Sirkis is indeed lent an additional hand by percussionist Adriano Adewale, whose unobtrusive touch on congas and shakers add to a song which highlights the talent of Spiliotopoulos and Stavi, who both take impressive, carefully weighted solos. There's an almost serene air to many of the tunes—"End of the Circle" and the somewhat blue and sweetly melancholic "The Journey Home" in particular. But there are also timely injections of adrenalin, as on the album highlight "Dream"—a deceptively simple yet powerful track where Spiliotopoulos lets go a little on guitar, encouraged by the bustling stick work of the leader.

Sirkis's compositions, like his creative, elegant drumming, are inviting and challenging. The contrasting textures and moods slide in and out of one another seamlessly. The result is a pleasingly deceptive and quite distinctive listening experience.

Stoned Bird; The Monk; The Bridge; Without a Story; Alone; End of the Circle; Dream; The Journey Home.