By Marcia Hillman
February 21, 2007
Sign in to view read count 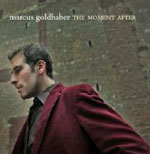 Marcus Goldhaber's background is in the standard songs of legendary popular music writers and the legendary singers who performed them. His debut album expectedly draws its material from songs dating from the '20s-'50s, and he delivers them in a pleasing straight-ahead manner.

Goldhaber is assisted by Jon Davis (piano), Paul Gabrielson (bass) and Kyle Struve or Will Terrill (drums). The format of The Moment After is simple, emphasizing the vocalist with some tasteful solos by the band along the way. Goldhaber's voice, breathy at times, is not overpowering, but he's able to convey an intimacy with his pleasant and easy manner of singing. He also pays attention to the lyrics and, in a nice twist, sings some rarely-heard verses.

The album offers an even balance of ballads and up-tempo material. "Lulu's Back In Town (with verse) swings and gives Gabrielson an opportunity for a tasty solo. The vocalist's Latin treatment of Patti Page's '50s pop hit "Old Cape Cod is interesting, but he really shines on the ballads, with an intuition for telling each story simply and honestly. "Be Careful, It's My Heart is a prime example. Also worth mentioning is Davis' piano work on "Honeysuckle Rose and Struve's brushwork on "That Old Feeling.

Goldhaber has a young voice that will mellow with time, but his feeling and delivery is already appealing. He could easily fall into the category of a "saloon singer," which is not a bad moniker, considering his company would include Tony Bennett and Frank Sinatra.