By Jim Santella
February 21, 2007
Sign in to view read count 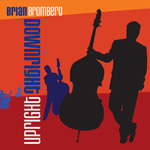 Retro-inspired grooves can mean a lot of things—it depends on how far back one wants to go.

On Downright Upright, bassist Brian Bromberg takes a retro tour of the era when Freddie Hubbard and Herbie Hancock were reaching a peak. Joe Zawinul and Eddie Harris were changing the scope of jazz. Weather Report was in, and jazz was changing rapidly. The umbrella was opening up to include innovative ideas and comfortable melodies that lingered in the mind for a lifetime.

Working with a crew that normally reserves its studio and stage time for smooth jazz or a similar, pop-inspired, contemporary form, Bromberg brings his big bass and piccolo bass aboard for a veritable party. He and his sidemen inject plenty of life into the scene on Downright Upright, honoring the jazz legends who have paved the way. These are no mere sidemen with Bromberg, either. Each brings a veteran's feel for contemporary jazz to the session, giving the bassist a rich palette from which to select. George Duke's piano solo on "Chameleon, for example, provides one of the session's high points. The others join Bromberg in creating several more plateaus on a session that comes recommended for its broad appeal and for its unmistakable groove.

The bassist solos frequently on both his acoustic bass and his electric piccolo bass with an expressive nature that finds him tearin' up the strings passionately. The sound of the smaller instrument resembles that of a bass guitar as Bromberg applies it to "Chameleon, "Leisure Suit, "Slow Burn and "Cold Duck Time. His five original compositions maintain the momentum found in the album's first three tracks, while his covers of older familiar tunes prove satisfying.

Bromberg's "Sunday Mornin' and "Shag Carpet capture a pure gospel mood that rocks the roof beams, while Dave Grusin's "Serengeti Walk, a smooth jazz outing that features guitarist Lee Ritenour, simmers in the afternoon sun. As evidenced by Downright Upright, retro grooves from a lyrical bassist like Brian Bromberg can seem as natural as sunshine on Hollywood Boulevard at noon. The mood that he creates, however, could steal the hearts of millions.