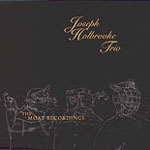 The Moat Recordings fills in a gap in the story of free improvised music. Bassist Gavin Bryars, drummer Tony Oxley and guitarist Derek Bailey (who passed away in December 2005) met in Sheffield, England in the mid-'60s and started out stretching the limits of modal jazz toward freer forms of musical expression, increasingly moving away from traditional jazz conceptions of melody, chord changes and rhythm. In its early days, the trio (named after a somewhat neglected British composer) neither made any studio recordings nor recorded any of its live appearances, which took place at a club weekly until 1966.

The existing early recorded material from the group consists of a few rehearsal tapes and some rather obscure sessions with alto saxophonist Lee Konitz from the '60s (decribed by Bryars in his highly instructive liner notes as being "hardly representative of our work"). It took more than thirty years until the three met again for a reunion concert in Cologne, Germany in September 1998 (which was recorded but has not yet been released). In the meantime, Bailey and Oxley had become highly influential figures whose music decisively shaped the development of European free jazz and free improvisation in general.

The music on this two-CD set was recorded in London's Moat Studios shortly after the concert in Cologne and contains fifteen pieces ranging from three minutes ("Matilda," disc two) to seventeen minutes ("Crookesmoor," disc one) in length. The Moat Recordings is the group's only studio recording released to date. As one might expect from a Derek Bailey record, the playing is abstract throughout, yet the trio refrains from aggressive power plays of any sort—quite the contrary, the players' close interaction and subtle interplay resembles contemporary chamber music, rather than the free eruptions of Charles Gayle or Peter Brötzmann. The recording quality is excellent, making it possible to hear all the nuances and overtones of Bailey's fragmentary guitar lines and Bryars' commenting bass figures.

The veteran Tony Oxley, who has been Cecil Taylor's drummer of choice for the last few years, generates a vast array of sounds from his kit and moves the music into different directions. In his sleeve notes, Bryars refers to the classic Bill Evans Trio (with Scott LaFaro and Paul Motian) as an early influence on the Joseph Holbrooke Trio during its formative years in the '60s. And as dissimmilar as the musical abstractions these three masters of free improvisation created in 1998 might sound in comparison to Bill Evans' romantic piano excursions, they share certain common features: spontaneous inventiveness, instrumental virtuosity, the mutual understanding between the players, and the equality of each instrumental voice all reveal the Joseph Holbrooke Trio's rootedness in the tradition of the great trio-formations in jazz.

In addition to over 130 minutes of dense, improvised music, Tzadik's beautiful packaging and Bryar's liner notes (plus a short, laconic comment by Derek Bailey) make this release a must hear for anyone interested in free improvisation. For listeners who are not yet aquainted with this kind of playing, The Moat Recordings might provide a good entry point.