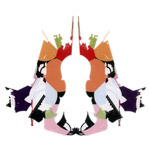 A member of the Anthony Braxton Sextet and the Reggie Workman Ensemble, as well as a performer with Pauline Oliveros and the Deep Listening Band, William Parker, Sirone and Billy Bang, Jason Kao Hwang brings his well-traveled violin to Graphic Evidence, a collaborative performance with soprano saxophonist Frances Wong and bassist Tatsu Aoki. On this perfect disc for a winter's day, the ensemble uses space as a fourth member, producing music of understatement and openness.

To The Endless Embrace of Light adds Wu Man's pipa, a stringed instrument similar in timbre to the shamisen, to the trio. Aoki provides the structure while Wong (on soprano) and Hwang bump the ceiling; Man's papery pipa helps Aoki convey structure. Wong sings sweetly on "Invocation and Resonance, boiling over with Hwang's urgings. Aoki plays percussively on "Microscopic. Wong indulges in shapely phrased melody, as Hwang flies high, wispily swinging from the top of the scale.

Transparent Tapestry plays a wind chime's song in harmonics. Aoki digs in for some rumbling arco; Hwang and Wong keen a high ending in whispers. Wu Man returns for "Alluvial Fan, this time taking part in the improvisational fun. Aoki holds to an imaginative bass line while the three instrumentalists head in all directions. Each musician maintains a barely audible presence on "Before Memory Begins. Wong blows mostly tuneless wind, with Hwang and Aoki gently tapping and plucking with a frequency that heightens the drama.

Graphic Evidence presents a trio of improvisers confident enough in their art to share tracks with graceful silence, coloring the canvas with disciplined intensity.