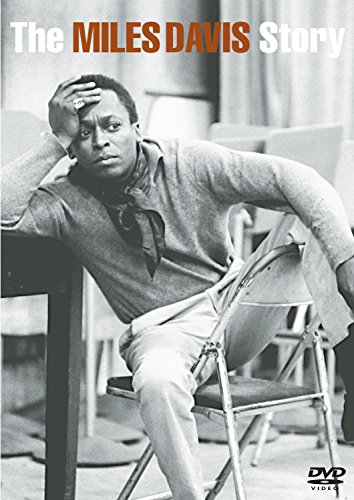 A virulent sort of man with a bent for misogyny, selfishness, and a deep rooted, almost fanatical racism, Miles Davis, as his music asserted and any thoughtful analysis confirms, was also one of jazz's three or four greatest artists, an individual belonging to group of men with sublime and graceful talent who also happen to embody the Byronic dictate of "mad, bad, and dangerous to know."

For anyone who's read Davis' autobiography, this biopic is chiefly notable for its images rather than its information. Davis himself appears throughout in interviews taped late in his life, and his voice, sounding as if the flesh has been hacked away from the back of his throat, is like what one might imagine belonging to those devil-on-the- shoulder creatures of early cartoon shorts. Naturally, a peculiar man with a peculiar voice is a target for mimicry, and this film possesses no more memorable example than when one of Miles Davis' ex-wives, Frances Davis, describing an evening out with Miles, after their divorce, relates how he referred to his then ex-wife as his current spouse at a gallery event and then motioned to one of his paintings, summarizing it thusly: "That's her ass."

The film's two crucial, lasting points, are also those that it expresses the most convincingly, making the whole a kind of mid-range success, having achieved modest ambitions well. The diverse styles that Davis moved in and the range of musicians he performed with—a tacit understanding of roles and relationships virtually unmatched in jazz—is made clear, freshly annotated, and properly contextualized through a series of short but telling interviews with people central to Davis' life and his music, in each of his various phases. And then there are the film's most striking sequences, those, inevitably, that feature Davis performing, live, in his prime. For all of his acerbity, anger, and mean- spiritedness as a man, the artist, though perhaps inseparable, is the Miles Davis that, ultimately, Miles Davis was. Watching him with the members of his second classic quintet—Wayne Shorter, Herbie Hancock, Ron Carter, and Tony Williams—jazz's premier, most cohesive band of the mid-sixties, is eye-popping in the manner of Jimi Hendrix at Monterey or the first screen footage of Duke Ellington and Louis Armstrong. One only wonders if Davis had to be a certain way to play a certain way and, if so—and I suppose he did—what must the curse be like for an artist who's lost his talent?