Home » Jazz Articles » Stian Westerhus: The Matriarch And The Wrong Kind Of Flowers

Stian Westerhus: The Matriarch And The Wrong Kind Of Flowers

By John Kelman
September 4, 2012
Sign in to view read count 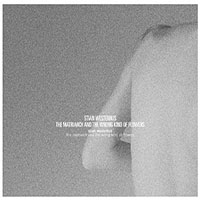 Beyond his reputation as Norway's "hardest working guitarist"—an éclat supported by, amongst many others, ongoing membership in Nils Petter Molvaer's trio and assuming the producer's role for the trumpeter's Baboon Moon (Sula, 2011); collaborating with the Trondheim Jazz Orchestra for Ripples, raptures and disbelief (a Molde Jazz Festival commission screaming for release); and, with Didymoi Dreams (Rune Grammofon, 2012), righting a wrong with the first recorded document of his duo with another fearless innovator, singer Sidsel Endresen—Stian Westerhus has managed to exploit the potential of his chosen instrument beyond all belief...and recognition. Even more than Galore—the guitarist's limited-run solo debut on Rune Grammofon's vinyl-only The Last Record Company imprint—Pitch Black Star Spangled (Rune Grammofon, 2010) was, quite simply, the kind of record that nobody with a mere 31 years on the planet had the right to make.

Two years later, if even the most intrepid explorer can be taken for granted once familiarity sets in, there's no fear of that with the equally mind-blowing The Matriarch And The Wrong Kind Of Flowers. If Pitch Black broke new ground, The Matriarch not only expands Westerhus' view of that terrain, it also finds (or forges) entirely new paths to hitherto unexplored territories.

Perhaps the most significant difference is where The Matriarch was recorded. Norwegian sculptor Emanuel Vigeland's Oslo mausoleum is a room that, quite simply, encourages a musician to think differently. Combining Westerhus' already expansive sonics—a mix of electronics, extended techniques, and a mindset that eschews musical orthodoxy—with a room sporting a natural 20-second reverb makes The Matriarch's sound positively massive. Whether it's the bowed guitar of "The Matriarch," the processed voices of "Forever Walking Forests" or the jagged electro-centricities of "The Wrong Kind of Flowers" that ultimately resolve into a sparer coda of dark-hued beauty, Westerhus' music may stem from improvisation, but the end result shares more with contemporary classicism than anything else—though such comparisons pale once scratching beneath the surface.

Bowed guitar dominates The Matriarch and, while it's hardly a new concept, Westerhus transcends mere gimmickry. The guitarist's ability to compose on the fly with a broad range of textures, melodic and harmonic ideations—even unexpected rhythmic twists and turns—has always revealed an underlying sense of purpose, but with the Vigeland mausoleum almost a musical partner, Westerhus can augment grander schemes with the nuanced results of slighter gestures.

Conventional constructs hold little sway in Westerhus' music. Whether striking the strings with his bow, sawing them vigorously, or somehow creating both a sustaining sonic wash and unexpected melodic motifs in real time, these nine pieces— without any hat-hanging hooks or predictable form—manage to be moving and memorable. It's hard to imagine an artist evolving this rapidly, but taking the frog leaps of Pitch Black Star Spangled over Galore, and now the stunning The Matriarch And The Wrong Kind Of Flowers over Pitch Black, it's hard to imagine what will come next.

But it'll be worth the wait.