Gavin Harrison & O5Ric: The Man Who Sold Himself

By GLENN ASTARITA
June 9, 2012
Sign in to view read count 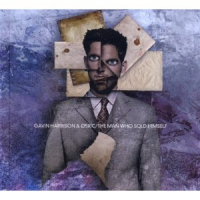 Harrison is true to form, these pieces primarily designed with complex rhythmic structures, blithe treatments, and 05Ric's rangy guitar implementations. However, from a vocal stance, O5Ric's expressive nuances, and unblemished diction works well in some spots, although many of these pieces lack memorable hooks, his vocals tending to seem distant—especially during refrains where his hybrid, recitation-singing tenders a rather coarse perimeter.

The duo conveys a bit more depth than what might be expected from a prog-rock duo via the punchy, odd-metered time signatures, featuring Harrison's amazingly sophisticated polyrhythmic fills and microsecond-type shifts in strategy. But it cannot be understated that the album may not divulge the killer blow on the basis of one or two casual listens; heady and compositionally demanding, the duo works within staggered pulses that roll into curvy currents amid false-endings and thunderous opuses.

Harrison overlays a steely bass line atop his patterned tom flurries on "Identitas," spiced with his cohort's dark guitar instrumentations, the duo eliciting notions of a cavernous background interspersed with dense mosaics. Harrison's astonishing performances play tricks on the psyche, where the convergence of two or more drummers may come to fruition. His crisp press rolls, scorching triplets, and precision-oriented breakouts help generate an expansive soundstage.

Harrison plays with the beat during the more traditional "Own," nicely enamored by O5Ric's more conventional verse-chorus processes and textural guitar treatments, adding a sonic dreamscape phenomenon that tenders a rather menacing contrast. Beyond laudable technical faculties, unorthodox harmonic components and the perpetually buoyant or heavy-hitting cadences, the program also benefits from a crystalline audio engineering process.

For drum students, this pared-down group setting enables Harrison to strut his very special stuff. Simply stated, he inadvertently provides a clinic. But looking at the big picture, the album may pose a debacle for the artists' staunch admirers. It resides more on the "outside" spectrum and doesn't fit snugly within the norm. Even though King Crimson's famously complex legacy intimates technical excellence, many of its compositions possess memorable melodies, and similar connotations also apply to Porcupine Tree's artistry. However, The Man Who Sold Himself presents an opportunity to witness two prolific minds traversing an alternate course that proposes copious challenges and intermittent rewards.