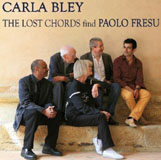 Once Carla Bley finds musicians she likes, she sticks with them. Bassist Steve Swallow, also Bley's life partner, dates back with the pianist/composer/bandleader to Musique Mecanique (WATT, 1979). Saxophonist Andy Sheppard first appeared on Bley's classic Fleur Carnivore (WATT, 1989). She's recorded with both on the trio Songs with Legs (WATT, 1995), but it was on The Lost Chords (WATT, 2004), with relative newcomer Billy Drummond on drums, that they best gelled as a small ensemble.

Despite her undeniable loyalty, Bley is never one to stick with the status quo. So, rather than releasing another quartet disc, at the advice of Sheppard she sought out Paolo Fresu—surely the greatest trumpeter to emerge from Italy since Enrico Rava—for The Lost Chords Find Paolo Fresu. The result is an album that's even better than its predecessor, and may well be Bley's finest small ensemble recording with a conventional rhythm section to date.

Bley's dry wit—another enduring characteristic—remains intact; one need only look at the titles to her six-part "Banana Quintet. But the suite's opener, "One Banana, is a poignantly lyrical ballad that's largely a feature for Fresu, and one of Bley's most strikingly beautiful tunes since "Utviklingssang from Social Studies (WATT, 1981). Fresu's tone and careful choice of notes is as methodical as the writing but, like Bley, feels no less spontaneous, and he meshes with Sheppard in a way that's rare, even for the often-used saxophone/trumpet frontline.

"Two Banana possesses a slow groove that builds through Sheppard's powerful tenor solo, Swallow locked-in with Drummond's potent backbeat, only to pare back and begin again during Fresu's equally ebullient solo. Bley's never been virtuosic in her approach—choosing, instead, a sparer and, at times, quirky idiosyncrasy on the mid-tempo swing of "Three Banana, as both accompanist and soloist. Drummond gets a chance to develop an increasingly intense solo over a piano/bass ostinato on "Four, a tune referencing the dark arpeggios of "I Want You (She's So Heavy), from The Beatles' Abbey Road (Capitol, 1969).

There are plenty of stylistic references, albeit refracted through Bley's personal prism. The light Latin pulse of "Five Banana is tempered by a melancholy melodism not unlike trumpeter Kenny Wheeler's, but with an expansive feel demonstrative of Bley's wonderful voicings for this quintet. It also belies its more complex five-beats-to-the-bar/five-measure cycle. "One Banana More is a brief, through-composed coda that brings the "Banana Quintet to a gentle close, setting the stage for "Liver of Life, another mid-tempo swinger whose change-heavy structure provides plenty of grist for Fresu, Sheppard and Bley. As ever, economy, without sacrificing emotion, is the definer here.

Swallow's clear and warm electric bass sets the tone for "Death of Superman/Dream Sequence#1—Flying, his approach to soloing and accompaniment the compelling reason why he's been Bley's bassist of choice for nearly thirty years. The Lost Chords Find Paolo Fresu finds Bley at her most elegant compositionally; but with a certain je ne sais quoi that still injects subtle levity. Beautiful.