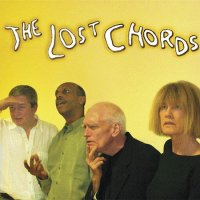 While she is perhaps better known for her large group work, including Fleur Carnivore , Goes to Church and last year's marvellous Looking for America , Carla Bley has experimented with smaller ensembles over the years, right down to duos and trios. But never, arguably, as successfully as with The Lost Chords , a pared down quartet outing recorded on tour in Europe in October, 2003. Featuring long-standing musical companions Andy Sheppard on saxophones, Steve Swallow on bass, and Billy Drummond on drums, The Lost Chords finds Bley armed with a new book of music that feels lighter than her usual fare, although it may be a result of the minimal instrumentation because the result is no less substantive than any of her larger works.

Bley is one of an elite group of modern jazz composers to emerge with a significant and consequential body of musical work, and the material on this recording expands it with pieces that range from the whimsical "3 Blind Mice" to the funky "Hip Hop" and the light tango of "Tropical Depression." Through it all she manages to create music that is at times tender, other times wryly grinning off the page.

While Bley is a composer and bandleader of no small significance, she can hardly be considered a virtuoso on piano. Still, she has the uncanny ability to choose just the right note, exactly the right chord. Her solos may be simple, but they contain distinctive themes that ring true with a personal lyricism. Her choices are often unpredictable, yet never over-intellectualized.

Bley had previously worked in a trio with Sheppard and Swallow, releasing '95's fine Songs with Legs. The addition of Drummond brings an obviously more emphatic rhythmic pulse to the proceedings, but as strong as Drummond is as a player, he never overpowers, in fact there is a certain ethereal nature to the entire quartet that lends the sometimes oblique writing a surprisingly approachable sound. Even more challenging pieces like "Wink Leak," which alternates bars of five with bars of six, feel somehow natural and unforced.

While Sheppard, Swallow and Drummond are more overtly accomplished players than Bley, The Lost Chords is not about displays of musicianship. Although everyone turns in fine solos-catch Drummond's polyrhythmic musings on "Traps," Sheppard's gentle yet insistent soprano on "Lost Chords I," and Swallow's ever-sardonic work on "Red"—the emphasis is on creating a group sound, a group dynamic that differentiates it. Fine writing, exceptional playing that never loses sight of the truth of the material, and a distinctive group identity that makes this project like no other in Bley's broad body of work, The Lost Chords ultimately proves to be one of her best efforts to date.