By TROY COLLINS
November 20, 2016
Sign in to view read count 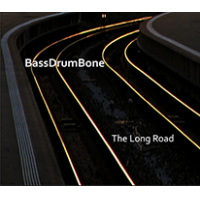 Trombonist Ray Anderson, bassist Mark Helias, and drummer Gerry Hemingway have been performing together as BassDrumBone for almost four decades. The Long Road, the trio's tenth release, was recorded in celebration of the ensemble's forty-year anniversary, and is the group's most wide-ranging and definitive effort to date. In honor of this auspicious occasion, they invited esteemed tenor saxophonist Joe Lovano and vanguard pianist Jason Moran to sit in on a handful of tunes, which reveals the unit's sterling rapport, as well as their adaptability when collaborating with other artists.

There is no established leader in this trio of equals; though Anderson's expressive trombone is an obvious focal point, he regularly plays a supportive role, enabling Helias and Hemingway opportunities to take the lead. Technically, their roles are interchangeable, making each member equally responsible for providing melody, harmony and rhythm, in much the same way that each contributes to the band's songbook. Despite subtle compositional variety, which ranges from riotous marches and funky grooves to expressionist blues and dulcet ballads, these swinging numbers exude the sort of stylistic consistency born of longstanding camaraderie.

Lovano parleys gracefully with Anderson, adding bluesy soulfulness to the cuts he appears on, while Moran imbues his features with a singular harmonic sophistication, although ultimately, it's the near clairvoyant interplay of the core trio that's most impressive. The double-disc collection ends with a half hour of material taped live in concert, capturing BassDrumBone's innate chemistry at its most exploratory, expanding upon basic song forms with a carefree élan common to experienced veterans.

Four decades on and still going strong, this venerable group, comprised of established musicians who share aesthetic outlooks and common histories, is something of a rarity by contemporary standards. Richly varied, The Long Road is a winning testament to their creative longevity.