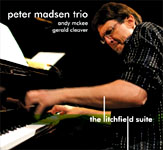 Peter Madsen fortified an already solid reputation with a pair of stellar solo piano works in the last decade: Sphere Essence: Another Side of Monk (2003) and Prevue of Tomorrow (2006), both on Playscape. Now he works his magic with bassist Andy McKee and drummer Gerald Cleaver on The Litchfield Suite, a vibrant performance captured live at the Litchfield Jazz Festival and Camp, where Madsen has performed and taught for several years.

The songs on The Litchfield Suite are diverse, touching various styles, with interludes between giving each band member a brief spotlight. On the introduction to the suite Madsen sets the pace by strumming the piano strings to set the atmosphere, supplemented by light and dark single note lines, McKee's low-moan arco and Cleaver's shimmering cymbals enhancing the tension. After this somber opening, though, the trio stretches out on the up-tempo tunes like the Latin-tinged "The Source and Force" and "Fanny Pack Factor." The relaxed Sunday afternoon suburban feeling of "Chillin' at the Cottage" and the lovely impressionism of "Run For Your Lives" provide balance. The trio also shines on hard bop burners like "Cool Camp for Kids" and "Forward Motion."

Cleaver is an anchor who plays blistering, complex drum solos and consistently bold polyrhythms. McKee adds dewdrop-soft glissandi or robust pizzicati and his bowing can sound like a symphony or a buzz saw. But this is Madsen's showcase. He's a solid composer and arranger whose piano mastery is pure dynamite. He plays flawlessly and with rhythmic complexity, applying symphonic flourishes or lightning-fast melodic runs and hammering out passionate block chords. The man is virtually a band unto himself. The musical sophistication and telepathic interplay among this excellent trio makes The Litchfield Suite a triumph.