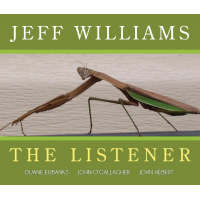 Drummer Jeff Williams spent the first part of his career building a name for himself as a supporting player, laying down the rhythmic law for Lookout Farm and serving as sideman to the jazz stars, but these days he's making waves as a leader. He turned plenty of heads with Another Time (Whirlwind Recordings Ltd., 2011), which announced his return to recording under his own name and featured a potent piano-less quartet; that same foursome returns for this intriguing live follow-up.

The Listener is a powerful sequel full of surprises, improvisational wormholes, rhythmic thickets, tuneful lines and open spaces, but it's more than that to Williams; to him, it's recorded documentation of a dream fulfilled. Williams' wish to bring his New York-based quartet to his current home base—the UK—was finally granted in May of 2012. Upon arriving on the Old Continent, the group immediately won over the locals at the Cheltenham Jazz Festival and made its way to London's Vortex Club where it recorded this album.

This seventy-three minute set focuses on original material from Williams and his cohorts, with an open-gazed "Dedicated To You" standing alone on the standards side of the equation. Four numbers belong to Williams, two to trumpeter Duane Eubanks, and one to bassist John Hebert, but they all share the same aural DNA, regardless of who wrote them. Hebert often travels alone in open pastures, introducing songs with his ear-catching bass work or drawing focus mid-number, and Williams works his way around the time as he pleases. He can play it funky in a dark and menacing manner ("Scrunge/Search Me"), paint outside the lines, or draw the lines himself. Saxophonist John O'Gallagher is the most wonderfully unpredictable part of the equation, sticking to the script when necessary and letting the moment take him away elsewhere, while Eubanks presents a more centered approach to this left-of-center material.

The instrumentation of Williams' group—alto saxophone, trumpet, bass and drums—immediately brings to mind the classic Ornette Coleman line-up(s), and the nexus goes beyond this tools-of-the-trade match-up. O'Gallagher and Eubanks project a loose-tight duality and perform with a playful poignancy that references the partnership of Coleman and trumpeter Don Cherry. Williams and bassist John Hebert connect to Coleman's rhythm section counterparts through their efforts to subvert standard time keeping roles without damning time. Together, all four musicians manage to point to Coleman without giving themselves specifically to his line(s) of musical reasoning. In fact, they come closer to copying Coleman's descendents at times, as observed on a Masada-esque number with hints of tropical whimsy ("Borderline"), than Coleman himself.

The Listener is a logical extension of its two-years-older studio sibling, but it's not the same; these four men have extended the boundaries of their own work and strengthened the connective tissue that binds them. Williams' work with this quartet is special and deserves continued exploration.

Beer And Water; Borderline; She Can't Be A Spy; Fez; Lament; Scrunge/Search Me; Slew Footed; Dedicated To You.