Geri Allen: The Life of a Song

By JOHN KELMAN
September 10, 2004
Sign in to view read count 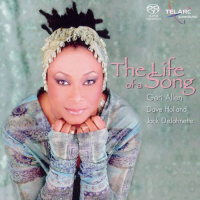 It's a safe bet to say that any good album will not only bear repeated listens, it will benefit by them, as hitherto unheard layers are revealed and subtle nuances are brought to light. But Geri Allen's new release, The Life of a Song , demands to be heard more than once because there is such an overriding sense of joy in the making that it completely overshadows the other equally impressive aspects of the record. And that's not a bad thing. In a time where so many artists are captivated by their own intent, their own severity, Allen stands out as an artist who is clearly just happy to be alive and doing what she loves, and this feeling dominates an album that shimmers and glows with its own buoyancy.

Allen has been so busy the past few years with artists including Charles Lloyd, T.S. Monk, and her husband, trumpeter Wallace Roney, that it's easy to gloss over the fact that six years have passed since her last recording as a leader. But growth is a constant, and Allen's development is clearly palpable. On a programme of mostly original compositions, with three standards thrown in for good measure, Allen demonstrates an ability to make music that demands attention and challenges the ear, while at the same time remaining completely accessible. And with bassist Dave Holland and drummer Jack DeJohnette fleshing out this mainly trio affair, she has a rhythm team that is capable of maintaining an approachable backbone that, at the same time, yields a richer, more detailed tapestry on further examination.

"LWB's House (The Remix)," for example, may start with a deceptively simple chord pattern that somehow brings to mind memories of Bill Cosby's Huxtable household, but the melody, with its slight dissonance, describes a place that feels a little bit like controlled chaos. "In Appreciation: A Celebration Song" starts with a simple two-chord vamp, but Allen knows how to take it just the slightest bit outside, in the best tradition of Herbie Hancock, without making it too obscure. The tune then segues into a more melodic four-chord pattern, setting the stage for a characteristically lyrical solo from Holland, before shifting into a more open vamp where Allen solos with a more impressionistic bent, as she returns to the original theme.

Even when Allen gets more intense, as she does on the modal workout "Holdin' Court," there is still an underlying feeling of optimism. You can sense that incontestable vivaciousness, even on the tender "Unconditional Love" and lightly swinging title track. And her treatment of the three standards, especially the lush version of Mal Waldron's "Soul Eyes," featuring a three-piece horn section, is poignant without being maudlin.

Geri Allen has been, to some extent, a musician's musician for far too long. With The Life of a Song she delivers a lighthearted yet never insubstantial or compromising album that will hopefully bring her the more widespread attention she so richly deserves.