Ted Rosenthal: The King and I 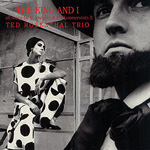 There was a trend back in the '50s and '60s for jazz artists including Andre Previn, Oscar Peterson, Stan Kenton and Dave Brubeck to record albums based on Broadway musicals. But apart from an obscure 1958 album by Wilbur Harden, The King and I, one of the era's most acclaimed musicals, was overlooked.

Pianist Ted Rosenthal corrects that oversight on his new CD on the Japanese Venus label, a beautifully realized treatment of nine tunes from the 1951 Rodgers and Hammerstein show. Rosenthal, a talented mainstream pianist, best known perhaps for playing in saxophonist Gerry Mulligan's last group, has a crisp sound and precise approach that captures the essence of classic songs like "Shall We Dance, "Getting to Know You and "Hello, Young Lovers. He also has the vision to reimagine lesser songs like "I Whistle A Happy Tune, begun as a loping blues before changing tempo to finish up with some virtuosic high-speed soloing.

It doesn't hurt either that Rosenthal's joined by a dream rhythm section of George Mraz (bass) and Lewis Nash (drums). Together they make this a fitting and long overdue tribute to one of Broadway's best musicals from some of jazz's finest musicians.

My Lord and Master; Shall We Dance; I Have Dreamed; I Whistle a Happy Tune; We Kiss in a Shadow; Getting to Know You; Something Wonderful; March of the Siamese Children; Hello Young Lovers.