BY ROBERT SPENCER
July 1, 1997
Sign in to view read count 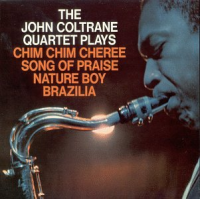 “Chim Chim Cheree”? Sure. The guy has a hit with “My Favorite Things,” and some record company executive with gold chains sticking out of his chest hairs says, “Johnny! We love this far out stuff, this ‘Chasin’ the Trane’ stuff. Beautiful. You’re a spiritual cat, you know, Trane (may I call you Trane)? And I respect that. I do. But hey, we want to sell records, you know what I’m saying. You want to reach people. You want more people to pick up on what you’re saying. ‘A love supreme,’ right? So how about going back to the Julie Andrews thing one more time?”

Maybe it’s only like that in the movies and Ornette Coleman biographies. Maybe “Chim Chim Cheree” here was a way to recreate the “My Favorite Things” situation in the studio and show how much had changed in five years. McCoy Tyner was still on piano and Elvin Jones on drums. Jimmy Garrison had come into the group as the bassist in between the two recordings, but what had really changed was the leader’s intentions. While “My Favorite Things” is sunny, “Chim Chim Cheree” is full of foreboding. The fury with which he improvises (on soprano) on this track was certainly a harbinger. In fact, all through this recording the intensity has been turned up a notch since A Love Supreme, the immediately preceding quartet recording.

“Brazilia” was also recorded before, during the Live at the Village Vanguard sets in 1961. But here again, the mood is darker, the pace more intense, the virtuosity from all four players absolutely shattering. The highlight of the album is another unlikely piece, the Nat King Cole workout “Nature Boy.” Here Art Davis joins the quartet as a second bassist, ready to weave dark bowed lines here behind Coltrane’s warning theme statement. “Song of Praise” is another rubato ballad in the tradition of “Psalm” and “Alabama.” But the mood of this album is not broken in its fury and darkness. The music is often arresting and moving, but it certainly does seem as if the calm attainment of A Love Supreme has somehow been broken.

The new release of this CD has three bonus tracks. Two are different outtakes, and the other a live version, of “Nature Boy,” each quite fascinatingly different from one another and from the master take. The third is yet another unlikely piece, Anthony Newley’s “Feelin’ Good.” Only here is the prevailing spell broken, and just for a moment one gets the idea that the master might indeed be feelin’ good.

This is great music from a great musician. On that basis alone it stands. On another level it is as interesting a glimpse into the inner life of an artist as Mingus’ The Black Saint and the Sinner Lady or Mingus Plays Piano. The glimpse seems to reveal a troubled soul, and yet for all his openness about his spiritual journey and its vicissitudes, John Coltrane remains relatively inscrutable. Certainly he went against the grain of the prevailing religious attitudes of his day and ours by giving works of unsurpassed fury and ferocity titles like “Song of Praise,” Ascension, or “The Father and the Son and the Holy Ghost.” Maybe in doing so he was shedding light on a deeper truth. Spirituality is only unflaggingly comfortable to the superficial and the poseur; John Coltrane seems to have been neither. The John Coltrane Quartet Plays seems a bit of a misnomer for a work of such seriousness and intensity; in any case, it is an invaluable record of a man struggling to attain to greater clarity of vision.