By John Kelman
January 3, 2005
Sign in to view read count 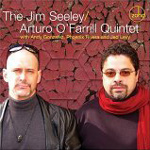 Trumpeter Jim Seeley may hail from Kansas, but he's clearly got Latin in his soul, having recorded with artists including the Mambo All-Star Orchestra, Luis Bonilla and, most significantly, Chico O'Farrill. Teaming with O'Farrill's son Arturo, a pianist who has acted as musical director for his father's Afro Cuban big band both pre- and posthumously, Seeley demonstrates a cosmopolitan approach to jazz on The Jim Seeley/Arturo O'Farrill Quintet , Seeley's first recording as a leader and O'Farrill's fourth. Afro Cuban is the reference point, but both Seeley and O'Farrill demonstrate concerns that are farther afield on an album that may not rattle any cages but is, nevertheless, an unassuming and direct album that clearly has a charm of its own.

Comprised wholly of Seeley compositions, the album gets off to an auspicious start with "Truth Juice," where the front line of Seeley and saxophonist Jed Levy brings to mind the Bobby Timmons era of Art Blakey's Jazz Messenger with a shuffle/swing groove driven by drummer Phoenix Rivera. Seeley's formidable technique shows up early on, in a solo that is more Lee Morgan and Woody Shaw than Miles Davis, occasionally using a wide vibrato to great effect. Two sides of the bossa nova coin, "Solita" and ""Starry Night" both feature O'Farrill on electric piano, with the former a little more insistent and the latter demonstrating a relaxed retro feel with Levy on flute that again recalls more straight-ahead '60s Blue Note-era recordings.

Seeley writes instantly memorable melodies that belie a richer complexity. "Little General" alternates between a straight-ahead feel and more Latin groove, with Rivera and bassist Andy Gonzalez managing the transitions seamlessly, never sounding forced or clumsy. O'Farrill demonstrates, as he does on the whole album, a lyrical sensibility and deftly personal touch that is evident whether he's on acoustic or electric piano. "Forest Path" is a lightly funky affair, with Levy contributing a well-constructed solo that leads purposefully into Seeley's, another model of form combined with vivid technique that tells a story without ever resorting to extravagance or waste. O'Farrill shifts the time with a triplet feel at the start of his solo that breaks things up slightly before settling back into the groove for a fiery improvisation that shows how skilled he is at navigating changes, finding the common harmonic thread that links everything together.

Seeley's engaging writing aside, what makes the album work is its complete lack of pretension. Even at its most insistent the disc has a loose and unconsidered ambience that gives one the feeling of sitting in on a private session where, with no one to impress, the quintet just relaxes and plays. The Jim Seeley/Arturo O'Farrill Quintet is an album that doesn't try to impress but does, nevertheless, with an authority and spirit that masks the clear virtuosity of everyone involved with an accessibility that makes for a light, but never lightweight, experience.