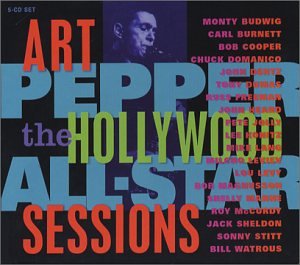 Just when the jazz community believes no more gold can be mined from the archives of the titan altoist Art Pepper, a mother lode is released.

First of all, a thumbnail sketch. Art Pepper emerged in the late 1940s as a formidable foil to the supremacy of Charlie Parker in the alto saxophone arena. After playing for Benny Carter and Stan Kenton and a stint in the army, Pepper embarks on his own, soaring through series of classic jazz recordings produced during the mid-1950s through the early 1960's. Art Pepper Meets the Rhythm Section (OJCCD-338-2) , Art Pepper + Eleven (OJCCD-341-1) , Getting' Together (OJCCD-169-2) , Smack Up! (OJCCD-176-2) , Intensity (OJCCD-387-1) , The Way It Was (OJCCD-389-2) , and the Omega Tape sessions (Blue Note 1064) are a lengthy tribute to Pepper's considerable prowess. Then heroin took its toll and Pepper was off from the mid-1960's to the mid-1970s, when he experienced a renaissance that resulted in a mountain of music being recorded before his death in 1982. During this renaissance period, Pepper recorded for Contemporary Records, a relationship that culminated in the fabulous multidisc box set The Complete Village Vanguard Sessions (Contemporary 4417) before switching to Galaxy. Pepper remained exclusively signed with Galaxy, where between1977 and 1982 he produced 16 compact discs worth of music for them, collected on monumental The Complete Galaxy Recordings (Galaxy 1016) .

During the period of 1979 until his death, Pepper, while still under contract to Galaxy, recorded for the small Japanese concern, Atlas, ostensibly as a sideman on a series of "All-Star" sessions, featuring a number of prominent West Coast musicians. As Pepper's wife Laurie, recounts in the box liner notes, Pepper was approached by Japanese producer Yasuyuki Ishihara who wanted him to lead a series of recordings that would reprise his beast work from the 1950s with the same personnel. These recordings were expected by Ishihara to sell well on the island. Pepper had the readily apparent problem that he was under exclusive contract, but still wanted to give Ishihara what he wanted. He was not so interested in covering old ground and so stipulated that he and his wife Laurie would choose the sidemen for the sessions. So, under the guise of sideman/leader, Pepper recorded seven releases for Atlas between 1979 and 1982. These recordings include:

Until now, these recordings were available only in Japan, though their existence was never a mystery having been documented in Todd Selbert's discographical addendum to Pepper's autobiography, Straight Life. The release of The Hollywood All-Star Sessions represents the most significant addition to the Art Pepper discography since the release of The Complete Village Vanguard Sessions in 1995. The significance does not just stop at availability, but also benefits from a bit or reverse psychology on the part of the altoist. In his last performing years, Art Pepper's original dry-ice cool sound transmogrified into the plaintive wail of a lifetime of frustration and hurt. Pepper felt that as a leader, he always had something to prove. He had to always conquer. This extreme exegesis manifested in music of great beauty, tempered with anguish and tension. When Pepper performed as a sideman, he was able to relax. Lacking the pressure of session leadership, Pepper found himself able to relax and have fun. This relaxation is evident on every cut of this box set.

Pepper surrounded himself with friends, old and new. Bill Watrous displayed his considerable wares on trombone as well as Sonny Stitt and Lee Konitz on alto saxophones. Some of the old crew was on hand from the early days: Bob Cooper, Pete Jolly, Shelley Mann, Jack Sheldon, and Russ Freeman, as well as Carl Burnett, Tony Dumas, and Milcho Leviev from the very recent past. The result is the most comprehensive relaxed Art Pepper available. His playing is bright and brilliant without being maniacally driven. He is at the very top of his game. This is a must set for all Pepper Pots.