By John Kelman
September 26, 2008
Sign in to view read count 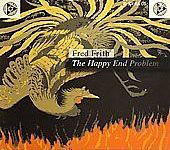 Since emerging in the early 1970s with Henry Cow, multi-instrumentalist Fred Frith has created a large, stylistically diverse body of work and a reputation for being both a fearless improviser and composer—fearless because he has steadfastly avoided any trappings that might lead to predictability, stylistic or otherwise. When he played at the 2008 Festival International de Musique Actuelle Victoriaville with his marvelous new Cosa Brava band and the eagerly anticipated Art Bears Songbook, an almost unbelievable criticism of Cosa Brava was that it was too melodic. As incredible as such an observation might seem, the same might be said of The Happy End Problem, though it would be no less superficial and just as woeful a misrepresentation.

If anything, The Happy End Problem—two pieces written for Amanda Miller's Pretty Ugly Dance Company—is a fine summation of Frith's career to date: enigmatic beauty juxtaposed with near-minimalist tendencies; occasional passages of jagged but strangely appealing edges and unapologetic free play blending with cued compositional sections; and a confluence of cultural references that are unmistakable, even as they join together for a new, unified whole.

The nine-part, thirty-minute "Imitation" brings together the ancient and the new in its combination of Kikutsubo Day's shakuhachi, Frith's laptop instruments and Patrice Scanlon's electronic treatments. It marries pentatonic Oriental melodies with denser Western harmony, and oftentimes provides, through Frith's knotty but never over-considered writing, sharp contrasts in very short spaces. That the varied fragments of "Ukon" not only work individually but together as a slowly evolving landscape is demonstrative of Frith's unfettered mindset. Violinist Carla Kihlstedt's idiosyncratic, serpentine themes are separated by open passages where Day's shakuhachi is as textural as it is melodic; a repetitive, minimalist groove slowly emerging in ever-lengthening chunks, divided by obliquely encyclopedic classical references that make "Ukon" and the balance of "Imitation" a compelling—and, yes, oftentimes very melodic—listen.

The Happy End Problem may be more about the music and less about specific performances, but it's hard to deny Kihlstedt's charismatic presence throughout. Few can keep up with Frith's demanding, multidisciplinary writing, but Kihlstedt brings a personal presence to music that defies those who believe serious music must inherently be obscure and impenetrable. Though there's nothing lightweight about The Happy End Problem, it's equally about direct and, at times, unadorned lyricism. Not that there's anything wrong with that.