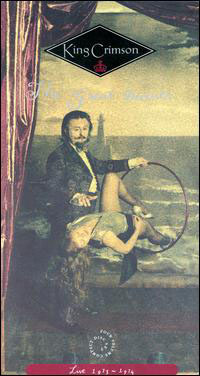 Despite bassist/stick player Tony Levin stepping in to replace departing touch guitarist Trey Gunn, the incarnation of King Crimson that released The ConstruKction Of Light (Virgin, 2000) and considerably stronger The Power To Believe (Sanctuary, 2003) seems to be, at the very least, on hiatus.

While Crimson's only remaining original member, guitarist Robert Fripp, has reconvened with 26-year Crimson veteran guitarist/drummer Adrian Belew for ProjKct Six, the future of Crimson proper is uncertain. This is, consequently, as good an opportunity as any to take a look back at The Great Deceiver (Live 1973-1974). A four-CD box set that brings together excerpts and complete shows from six dates beginning in October, 1973 and ending in June, 1974, it demonstrates just how much of an improvising band this incarnation of King Crimson was—perhaps the greatest improvising line-up in the group's long career.

The version of King Crimson that released Larks' Tongues In Aspic (DGM, 1973) was by far the heaviest and most guitar-centric version of Crimson to date. The previous band, featuring recently-deceased bassist/singer Boz Burrell, reedman/mellotronist Mel Collins and drummer Ian Wallace, had fallen apart on tour, with everyone except Fripp hell-bent on moving towards a more rock and blues-centric approach. Fripp's new version of Crimson would bring together a group of players from diverse backgrounds, but who demonstrated almost instantaneous chemistry.

Drummer Bill Bruford had departed from progressive rockers Yes as the group edged towards superstardom on the heels of Close To The Edge (Atlantic, 1972). While it seemed a curious choice at the time, anyone familiar with Bruford's subsequent career knows that in many ways he's a perpetual student, making the majority of his career choices based on art rather than commerce. Bassist/vocalist John Wetton was a member of Family, a curious but distinctive group that never achieved the success it deserved. Violinist David Cross was the new name, but lent the group a new texture and classicism combined with an edgy approach to soloing. Those familiar with the free improv community would have found the inclusion of percussionist Jamie Muir—who left shortly after recording Larks' Tongues In Aspic—an odd choice. But, interestingly enough, Muir would prove to be the most extroverted showman the group ever had; leaping around the stage with chains, dressed in an animal skin and spewing fake blood.

But those familiar with Fripp also know that he had links with the British free jazz community of the late-1960s/early-1970s. After all, he'd enlisted players like pianist Keith Tippett as early as In The Wake Of Poseidon (DGM, 1970), along with cornetist Marc Charig, trombonist Nick Evans, bassist Harry Miller and singer Paulina Lucas on Lizard (DGM, 1970) and Islands (DGM, 1971). With Muir's rapid departure Fripp's new quintet quickly became a touring quartet, proving to be the most loosely improvisational of all incarnations to come before—or after.

While even the earliest Crimson from 1969 would include improvisations that went well-beyond mere extended soloing, the 1973-1974 edition of the group would allow composed tunes to break down into lengthy free pieces that might magically find their way into the next structured song. Or, perhaps, not. While a four-CD set of material culled from performances of songs from only three studio albums is bound to have some repetition, does anyone really need to hear four versions of "Easy Money"?

The answer is an unequivocal yes. Even twenty-four hours represent a significant difference in how this group approached form-based material. The June 29, 1974 version of "Easy Money" breaks down from its aggressive edge into a softer solo section that, unlike the studio version, never returns to a final verse. Instead, it gradually evolves into a vamp that pairs warm chordal work from Fripp and a mellotron flute solo from Cross. The following night—Crimson's second-to-last show of its final tour before Fripp would dissolve the band (something nobody was aware of that point)—manages to find its way back to the final verse, but not before some frenzied high-octane soloing from Fripp threatens to completely unhinge the proceedings. The group was clearly in high spirits, and Fripp— considered by most at the time to be a serious, reserved type—manages to break Wetton up during the first verse by responding to the bassist's vocal line with one of the most extreme note bends in guitar history.

Even two versions of "Fracture"—Fripp's most convoluted composition to date and still a challenge for aspiring guitarists—end up being different enough to justify inclusion. Despite the detailed structure of the song, the shades of color added by everyone—and the open-ended section that immediately precedes the propulsive final third—illustrates just how open-minded this group was, even with the most regimented material. The equally constructed but initially balladic "Starless" is given the same treatment, also on two versions. Fripp's introductory "one note" solo gives way to two very different approaches once the dynamics and energy pick up—including a sadly under-mixed electric piano solo from Cross on the June 30th show.

Bruford's decision to leave Yes couldn't have come at a more opportune time. The opportunity to work with Muir, if even only for a few months, opened up his mind to possibilities felt in his work to this day. While he had a ways to go in terms of loosening up as he has in recent years, the chance to play in a group that, unlike his old cohorts in Yes, didn't believe in faithful reproduction of the studio recordings night after night, gave him an opportunity to evolve rapidly. He also began playing a host of tuned and untuned percussion, and worked hand-in-glove with Wetton to create some of the most thunderous grooves ever heard.

Finesse and Wetton are two words that really don't belong together in a sentence. A powerful bassist, Wetton would, along with Bruford, ratchet up the volume so much that Cross was quite often drowned out completely. As an improviser Wetton didn't posses the same breadth of language that Fripp—or Cross—had, but he was able to lay down powerful grooves alongside Bruford, and knew enough to keep things simple when it was clear he was out of his league harmonically. He was able to sing while navigating Fripp's often knotty writing. Singing over mellotron-laden tunes like "Exiles" and "The Night Watch" may not have been difficult; singing over his syncopated bass line on the Mahavishnu-informed "The Great Deceiver" clearly was.

Why Cross—at a time when Jerry Goodman was having no problems getting heard in the closing-in-on-jet-plane-decibel-level Mahavishnu Orchestra—was often drowned out is a question that will likely never be satisfactorily answered. Certainly, while technology to amplify acoustic instruments has come a long way since then, there had to be a way to make it work for him—but it never did. Part of it may well have been his own reticence. This was, after all, his first major break, whereas his other band mates were far more experienced in the studio and on the road. Still, as much as the mix sometimes puts him at a disadvantage, Cross was a player who never got the cred he deserved. Lyrical at times, abstract and jagged at others, he was an inspired choice by Fripp at a time when it was clear the Crimson co-founder wanted to make a significant stylistic shift.

Even the mellotron-heavy tunes had a more aggressive stance. And so, while "Exiles," "The Night Watch" and "Starless" all have clear precedence in the King Crimson that released the groundbreaking In The Court Of The Crimson King (DGM, 1969), they also represent a move forward as well. And with Richard Palmer-James' more direct lyrics, this Crimson also moved farther away from the abstruse, flowery and sometimes downright psychedelic lyrics of previous lyricist Peter Sinfield.

While Fripp had already established an MO that looked forward more than it did back—this is the last version of Crimson that would regularly play the iconic "21st Century Schizoid Man" from the 1969 debut—The Great Deceiver is also a rare opportunity to hear Fripp's solo, "Peace-A Theme," and the blues-based "Cat Food," both from In The Wake Of Poseidon. Fripp may have been moving towards a more assertive edge with this version of Crimson, but "Peace-A Theme" proves (as does "Book Of Saturday" from Larks' Tongues In Aspic) that he was still capable of lyrical elegance and delicate grace.

The improvs that regularly found their way into 1973-1974 Crimson sets sometimes emerged from songs, sometimes evolved into them, or sometimes stood alone. And while many began abstractly but ultimately found their way to powerfully funky grooves courtesy of Bruford and Wetton, there were exceptions. "Improv-Daniel Dust" begins as a delicate guitar/violin duet that ebbs and flows, only to find its way into "The Night Watch." "Improv-Wilton Carpet" proves this Crimson could be be adept at more abstract free play, patterns emerging only to disappear again as Wetton develops a repeated riff over Bruford's military-style drumming. That seamlessly segues into "The Talking Drum," a pattern-based vehicle for soloing that almost inevitably led to the metal-edged "Lark's Tongues In Aspic, Part Two," albeit in this instance an abbreviated version.

Improvs aside, there's only one song in the box that doesn't appear on a studio Crimson release, and for good reason. "Dr. Diamond," despite its episodic nature, never quite fits into the overall vibe of 1973-1974 Crimson. A bit too direct a rocker at first, it transforms into an irregular-metered blues at its core that features Fripp's singing tone in tandem with Cross. The way it finds its way back to a repeated figure from the intro feels clumsy, more an afterthought than a move that makes any real musical sense.

In many ways The Great Deceiver is this quartet's finest work, saying everything it had to say. Red (DGM, 1974), would find Crimson pared down to a trio, with the fired Cross appearing on only a couple of tracks, and the return of other guests including original Crimson co-founder Ian McDonald on saxophone. As a studio release it's a high point of Crimson's 37-year on-again/off-again career and signals, with the title track, "Fallen Angel" and "One More Red Nightmare," a shift that might have been worth exploring further had Fripp not become so disillusioned with touring and the harsh economic realities of the music industry in general.

Subsequent Crimsons would include some improvisation in performance, but never again to the same degree as the 1973-1974 line-up. And while future members Tony Levin, Adrian Belew, Trey Gunn and drummer Pat Mastelotto would be on more equal technical footings with Fripp and Bruford (who would return to Crimson for the early-1980s version and the mid-1990s double trio), none of the later incarnations could match this Crimson for its energy, unfettered sense of exploration and ability to just let things happen in a completely unconsidered way. Characteristics that made 1973-1974 Crimson the band that, if only remembered for a handful of enduring compositions, is fondly looked at as, perhaps, the most viscerally exciting version of this longstanding and continually reinvented group.