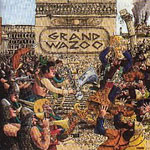 Frank Zappa didn't invent the word "wazoo" or proliferate its usage. However, he was the first to use it in an album and song title that, surprisingly, had no accompanying provocative/potentially censorable lyrics. The Grand Wazoo is one of the most playful, scatologic-free and accessible big band jazz/rock CDs that Zappa—or anyone else—recorded. The aural quality of the album possesses a life-affirming spirit, while the intermittent blurps, bleeps and "inside" soap opera buffoonery—once salient features amidst often brilliant instrumental interludes on earlier albums from Freak Out! (Ryko, 1966) through Uncle Meat (Ryko, 1969)—are notably absent.

Wazoo's grooves are largely straightforward: a moderately slow and jazzy waltz time on "For Calvin (and his next two hitch-hikers)"; a Chicago blues-based shuffle throughout "The Grand Wazoo"; the funk-ridden and mock-operatic "Cletus Awreetus-Awrightus"; fusionesque "Eat That Question"; and upbeat jazz waltz of "Blessed Relief." "Wazoo's" story overall is purely metaphorical—more imaginative and surreal, less didactic and devoid of Zappa's later cynicism and spitefulness.

Many fans and critics have claimed that Zappa's Waka/Jawaka (Ryko, 1972) is The Grand Wazoo's "twin brother." If so, Wazoo is surely "their mother's favorite son." Waka/Jawaka's largest opus, "Big Swifty," lacks the cohesiveness, focus and drive of "The Grand Wazoo," tending to ramble on for over 17 minutes. "The Grand Wazoo," in contrast, features strong ensemble work and exceptional solos by Zappa, trombonist Bill Byers and trumpeter Sal Marquez. Where "Big Swifty" loses focus, the relentlessly swinging impetus of "The Grand Wazoo" remains riveting, for its entire 13 minutes. Nothing on Waka/Jawaka is as hilarious or frenetically propulsive as "Cletus Awreetus-Awrightus"; the great Spike Jones would, no doubt, have been a huge fan of Ernie Watts' outrageous "mystery horn" solo.

"Eat That Question," musically the least substantive composition of this set, is based around a repeating, bluesy four-bar phrase initially stated by George Duke on electric piano. Zappa joins Duke in unison, followed by inspired solos from both players. The tune closes with the same four-bar phrase, now with horns in a mock bogus martial fanfare. "For Calvin (and his next two hitchhikers)"—the only tune on the CD with actual lyrics—is purposely meandering (in support of its screwy story line) until about two-thirds of the way through, after which some relatively complex and intense yet fun ensemble work is featured.

It's been said before that the CD's final cut, "Blessed Relief," is perhaps Zappa's most unabashedly beautiful work. While this may be true, it's hard not to visualize—especially in the A section—carefree, cavorting Charlie Brown and Snoopy-like characters returning home after an adventurous day. A surprisingly innocent and simple image for a Frank Zappa tune to evoke.

Thankfully, The Grand Wazoo is purely music for music's sake and for the sake of modern music we have this classic release available to remind us what great ensemble writing and performing is all about.

The Grand Wazoo; For Calvin (and his next two hitchhikers); Cletus Awreetus-Awrightus; Eat That Question; Blessed Relief.