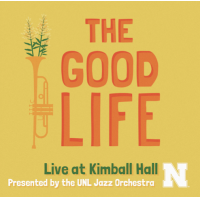 The UNL in question is the University of Nebraska-Lincoln whose Jazz Orchestra has taken so many emphatic steps forward under director Paul Haar that it deserves to be mentioned in the same breath with such elite programs as North Texas, Miami, Northern Iowa and a host of others. On its fourth CD, The Good Life, recorded in March 2016, the orchestra glides easily through a program of standards and originals that would test the resources of almost any ensemble, university or beyond.

Good as the ensemble is, even more impressive is the fact that everything was recorded live, without a safety net, at UNL's Kimball Hall. There are eight selections in all, half of which were arranged by members of the orchestra: Blahoslav Smisovksy's lively folk tune "Falesna Frajarka" and the Gershwins' "Our Love Is Here to Stay" by saxophonist Andrew Janak, Pat Metheny's portentous "Question and Answer" and his own composition, the ethereal "Omnipotent Q," by trombonist Derek Molacek. Paul Krueger arranged the Johnny Burke / Jimmy van Heusen standard, "Polka Dots and Moonbeams," while David von Kampen wrote and arranged the colorful "Luna B." Some listeners may be heartened to learn that "The Good Life" isn't the schmaltzy pop tune once spread far and wide by Tony Bennett but a sparkling new theme by West Coast maestro George Stone who also arranged the album's sunny, well-grooved opener, Cole Porter's "What Is This Thing Called Love."

Janak's supple tenor saxophone is showcased on "The Good Life" and "Our Love Is Here to Stay," Molacek's expressive trombone on "Luna B," Lee Heerspink's sometimes lyrical, other times dissonant guitar on "Omnipotent Q." Trumpeter Jesse McBee shares solo space with a more euphonious Heerspink on "What Is This Thing" and with Janak on "Polka Dots and Moonbeams," while soprano saxophonist Sarah Cosano takes center stage to solo brightly alongside Molacek on "Falesna Frajarka" and Heerspink on "Question and Answer." The ensemble as a whole, as noted, is astute and well-ordered, the rhythm section sharp and responsive. Having reached the point of summation, there seems nothing more to say or do but applaud Haar and the UNL orchestra for a job well done.

What Is This Thing Called Love?; Polka Dots and Moonbeams; Luna B; The Good Life; Our Love Is Here to Stay; Falesna Frajarka; Question and Answer; Omnipotent Q.