BY BRUCE LINDSAY
January 31, 2013
Sign in to view read count 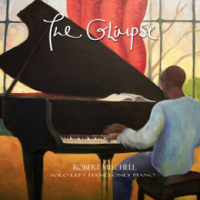 Pianist Robert Mitchell offers insight into a very particular musical place on The Glimpse: the world of solo, left hand only piano. The left hand: the hand responsible for the rhythm, the hand that keeps the beat, that lies in thrall to the melodic, excitable and exciting right hand. Why on earth would anyone want to play the piano using only the left hand? What a waste of half a keyboard and, indeed, half a pianist. Mitchell—a left hander himself—needs no more than 10 seconds of the improvised "Amino" to shoot such ill-informed prejudices out of the sky. His left hand is a hand that creates many moods, moving across the 88 keys with flair and grace and generating rhythms and melodies which engage and surprise.

Mitchell's career includes membership of the seminal British band Tomorrow's Warriors; collaborations with saxophonists Courtney Pine, Greg Osby and Steve Coleman; and a range of his own solo projects and groups such as Panacea. His fascination with solo, left hand piano, has led him to establish Leftitude, a festival dedicated to the art in jazz and classical music. As Mitchell remarks in his sleeve notes, left hand-only piano playing is an established approach to the instrument, but one which goes largely uncelebrated. This lack of recognition is both a musical one and a social one—this is, after all, the hand which has been seen as both sinister and gauche.

The left hand on The Glimpse is neither of these things. Beautifully recorded, with the pianist's every nuance readily discernible, Mitchell's style is spacious, never attempting to fill every gap, recognizing the emotional impact of silence and using it to terrific effect. The result is often somber and reflective, but always beautifully judged.

In addition to his own material, Mitchell performs pieces from two masterful yet contrasting writers: pianists Federico Mompou and Fred Hersch. Mompou's "Prelude No. 6 (Pour La Main Gauche)" has a rather melancholy loveliness, Mitchell's resonant bass notes emphasizing the mood. Hersch's more fluid "Nocturne For The Left Hand Alone" trades the emotional impact of Mompou's composition for a greater sense of drama.

Mitchell wrote his first composition for left hand only, "The Glimpse," in 2010. It establishes an ability to explore the possibilities of the form which Mitchell develops through the remainder of these compositions and improvisations. Two improvised pieces display the musical contrasts. "Alice's Touch" is the album's slowest and most fragile tune, "Leftitude" its most assertive and strident. "The Sage" shows Mitchell's ability to create a character in sound—evoking the energy, temper and eccentricity of the titular individual. "The Re-Emergent" is Mitchell's loveliest composition, a work of real beauty and emotional depth.

The Glimpse is a delight—a true celebration of the beauty of left hand solo piano and a reminder of music's seemingly endless imagination and desire for creative exploration.