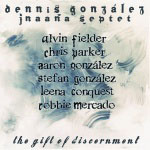 Trumpeter Dennis Gonzalez has been responsible for some beautifully realized music on record in the past and this is a worthy addition to the canon. The music's full of that often difficult to define quality called life, shot through with a group conception which makes for a realization which is simultaneously both tight and loose.

The presence of percussionist Alvin Fielder provides a kind of link with the percussive workouts of the Art Ensemble Of Chicago, and it's that aesthetic which pervades the first four minutes of the opener, "Raise The Spirit," before Chris Parker's piano strikes out for territories new with Aaron Gonzalez's bass hinting at harmonic possibilities. Singer Leena Conquest adds a further facet when she comes in and the gradualism of approach has the effect of enticing the listener in on the promise of new vistas.

They come to the fore on "Ganesha The Spy," where Parker's piano sounds slightly portentous, only for the mood to disperse in the wake of percussion before Gonzalez maintains the stately, quietly reverential mood. Again the percussion is deftly handled in terms of deployment. The lyricism of the piece is perpetually foreboding, but in a manner that's the opposite of off-putting. Not for these guys is the use of volume and instrumental screaming in pursuit of spurious spirit summoning.

"Tamazunchale I" is effectively a free bop outing, but it still gives Gonzalez the chance to show how he's come on. Any debt he might once have owed Don Cherry was at best debatable, but now he's his own man, not least in terms of his rhythmic conception. The percussion is busy, agitated at this tempo, but not to the point at which it's detrimental to the music's momentum. Again the key is realization. This is music as the product of group conception and the morality that implies is never in doubt.

"Portugal (for Linda Sharrock)" is shot through with such rhythmic vitality that Conquest's vocal establishes itself in counterpoint, her sustained notes belying the level of activity beneath. The very irresolution of the piece lends it an amorphous air, but that's only one of the many happy surprises on offer here.