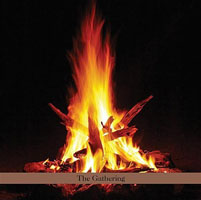 Jon Madof was studying jazz and rock guitar when he first heard John Zorn and Masada, playing what Zorn eventually termed "radical Jewish music." Masada's sound, imbued with the fire of rock and the dynamic improvisation of jazz—and combined with the powerful roots of Hebraic modes and Middle Eastern rhythms—became an inspiration to make something new out of tradition. It led Madof to a similar expansion of Jewish religious and cultural music beyond the world of scratchy Klezmer and cantorial discs. The result was Rashanim, a guitar power trio named for the noisemakers spun on the holiday of Purim, that revels in intense grooves and sultry themes, tinged with the echoes of traditional melodies.

After three previous albums on Zorn's Tzadik label, Rahsanim's The Gathering cuts the juice and revels in the acoustic sounds of several guitars, bass banjos, and a number of other crazy toys. The band has experimented with acoustic tracks on past albums with favorable results, but the results here are particularly soulful, with each song unfolding in its own hip groove, and blooming with a rush of different genre touches into something truly unique.

Madof's guitars sing with a twang that reaches to the common roots of folk, rock, and blues. His improvisations are alternately introspective and earth-shattering, even through the pared down simplicity of the acoustic setting. Within a tune like "Judges," the distinctly Cuban flavor of his classical guitar mixes it up within an Eastern European groove. Then, on "Kings," his acoustic sound reaches equally into traditional Jewish modes and country-western music.

Drummer Mathias Kunzli brings an arsenal of clicks, clangs, chimes, patters, rings, shakers, and whistles, along with the prerequisite heavy rock beats. And people need to start paying greater attention to Shanir Blumenkranz, who continues to make fantastic music as one of the most interesting and versatile bassists in the rarified downtown New York scene. At times, he plays with a sound almost suggesting the dulcimers of old Klezmer, while at others, he kicks out heavy rock grooves that defy the album's "unplugged" label, as on the downhome swampiness of "Deborah."

The whole album is incredibly diverse, full of unexpected moments and eclectic revelations. The use of voices in unexpected places—in a mystical chanting form on "Jeremiah," and on the epic closer of "Joshua"—is just one example. The band has crafted an album full of beautifully deployed sounds, particularly on a series of brief musical vignettes that feature delicate little melodies teased out on eclectic instruments such as glockenspiel and melodica. It makes for an eclectic listening experience that should appeal to any lover of creative music and melody.