By Eyal Hareuveni
December 18, 2007
Sign in to view read count 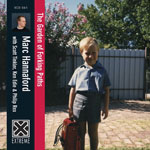 Named after a famous short story by Argentinean writer and poet Jorge Luis Borges, Melbourne-based, twenty-five year-old Australian pianist Marc Hannaford uses a labyrinth-like model, similar to the stories of his namesake, to construct this impressive debut . Hannaford, together with some of the best improvisers in Australia—trumpeter Scott Tinkler, drummer Ken Edie and bassist Phillip Rex—present eight pieces that weave the independent and distinctive voices of his collaborators into a multi-layered texture. The musicians work best in a tight group context. Still, at the same time, their personal improvisational digressions are dazzling, creating an accumulated effect of well-planned narrative and definite solidarity of sound.

Hannaford writes, in his liner notes, that all players worked hard on developing their own rhythmic and melodic languages as means of interacting, free from any genre conventions. Indeed, this kind of conviction and openness to the possibilities of collective and open improvisation is astounding, with all five tracks composed collectively by Hannaford and his players. The composed tracks, like the seventeen-minute opus "G.E.B.," follow a clear and confident framework while stimulating the collaborators to pursue their interpretation. Tinkler—with a sweeping, playful and singing tone that colors Hannaford's more contemplative playing—is most notable, as is Rex, who interacts in a reasoned and authoritative fashion with the pianist.

Hannaford's solo piece, "I'll Go Down...," is striking in its use of his percussive playing to form a counterpoint, as if two pianists are playing the same piano. "Head Check" and "222 1/2" feature Hannaford, Edie and Rex exploring beautifully open-ended textures. On the closing "What Was That?," again with Tinkler, all four musicians follow a more fiery thread, passionately together.

This is the third installment in Extreme Flute's Antipodean series, highlighting Australian artists exploring the boundaries of music, and is a wonderful showcase of some of the great music from Down Under.